Jeffrey wrote a book called “ Make ‘Em Laugh” with Richie Tienken, owner and founder of the legendary comedy club The Comic Strip, for the 35th anniversary of the club which Tienken opened in 1976.  The introduction is written by Chris Rock.

Tienken and Eddie Murphy discovered Chris Rock there in 1986, and the club also launched the careers of superstars like Larry Miller, Lewis Black, George Wallace, Jerry Seinfeld, Ray Romano, Susie Essman, Lisa Lampanelli, Colin Quinn, and many more, all of whom are in the book.

As a result of his many years of writing material for the famed Friars Roasts Jeffrey was asked to do a book for Kensington Press on celebrities’ favorite nasty jokes. The book was called “ Filthy, Funny, and Totally Offensive –Jokes So Dirty, Comedians and Entertainers Only Tell Them To Each Other” which is available in Barnes and Noble and Amazon.com.

In 2012 he was the official celeb interviewer for Just for Laughs in Montreal the biggest comedy festival in the world, where he interviewed 40 of the biggest stars there including Howie Mandel, Adam Carolla, Ken Jeong,  and Gary Shandling.

As a result of his interviewing reputation he got to play himself three times on Nick Kroll’s “Kroll Show” on Comedy Central in scenes with Nick Kroll, John Mulaney, Jon Daly, Amy Poehler, Karen Black, Laura Dern, and Katy Perry.

Jeffrey taught his Comedy Writing class for The Learning Annex, entitled “How To Write Comedy”, and was also accepted to the faculty of Baruch College to teach his course on “How To Write Stand-Up Comedy.”

Jeffrey was the co-writer of a one hour television drama that aired on NBC called De La Salle, starring the voices of Edward James Olmos and Lynn Whitfield. The special was based on the real school of the same name in Manhattan that serves academically talented children from low-income families. They used the real kids and faculty as actors.

It’s about three young male cousins in a close-knit Italian family who are tired of their fathers not opening up to them emotionally. Out of desperation, they kidnap their own fathers for a week-end of forced male bonding. It’s funny and touching at the same time.

At the request of Peter and Rory Rosegarten of The Conversation Company, Jeffrey was recently named the Head of Comedy Programming at the GoldCoast International Film Festival on Long Island, coming up in October of 2013, and will be planning a gala in honor of Susie Essman as part of the festivities.

One of his proudest achievements was as a “reporter” for the legendary comedy newspaper Weekly World News where he wrote unusual stories like ” Tap Dancing For The Criminally Insane”, “Man Slips On Pat Of Butter, Winds Up In Next Town”, and “Top Model Has Abdominal Organs Removed for Thinner Look.” He was also given his own column entitled “Gurian’s World of the Bizarre.”  Some of his cover stories appear below. 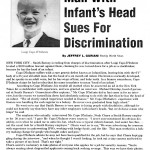 He also wrote the script for a corporate film for Ernst and Young called “Innovation”, that was shot by Firebrand Films, and he was a writer for the televised Friars Roasts of Drew Carey, Rob Reiner, and Jerry Stiller that aired on Comedy Central.