I remember back around 1996, when UCB first came to New York, seeing them perform at the Laurie Beechman Theatre in the West Bank Cafe, on West 42nd Street, and it was Matt Besser, Amy Poehler, Ian Roberts and Matt Walsh.

I understand the original group also included Ali Farahnakian, who went off on his own and opened The PIT, where my photo was hanging on the wall of the Men’s Room! One summer day, a guy who turned out to be Ali asked if he could take my photo, cause he thought I had “an interesting look!”

I didn’t think any more about it until one night I was at The PIT in the Men’s Room, standing there taking care of business, when all of a sudden I glanced to my right and saw myself smiling back at me! Right at eye level! It was shocking to say the least, … but funny!

It was the photo he had taken of me, in a line of other photos of people who he thought looked interesting, but mine was right in line with where I was standing, and it just struck me so funny.

The PIT has since moved to West 24th Street, and when I was there I forgot to check the Men’s Room to see if I was still up! (LOL)

Anyway, even in the earliest days, Amy Poehler stood out as a performer. Maybe it was because she was the only girl with three guys, and she was blonde, but I think it was something more than that. I think even in those earliest of days her talent stuck out. I think she may have even had a chipped front tooth in those days, (figures I’d notice that! LOL), but she went on to become one of the most successful women in TV, and that’s incredible. It makes the early memory that much more exciting!

Plus she married Will Arnett and looks fantastic now. Success tends to agree with people!

Anyway, her show, Parks and Recreation, was up for Best Comedy Series at the Comedy Central Comedy Awards 2012, airing tonight. Rob Riggle was the presenter, and it was up against 30 Rock, Curb Your Enthusiasm, Happy Endings, and Modern Family, … all heavy hitters, … and it won!

This little video clip is of the cast’s acceptance speech. Later in the week I’ll be posting more video of them in the press room, but it was Amy Poehler, creator Mike Schur, Adam Scott, Retta, and Jim O’Heir! 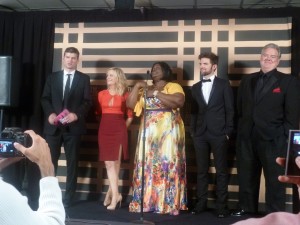 Check it out right here and make sure to tune in tonight at 9 P.M. on Comedy Central to watch the show!