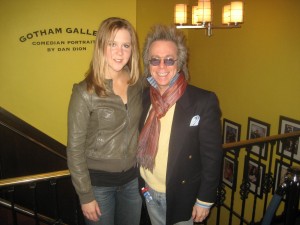 Jeffrey Gurian of Comedy Matters TV with Amy Schumer at Gotham Comedy Club! All I needed was a jaunty Captain’s hat! ( Read further to get that one!)

Amy says that if people like her, it’s because she has a “cabbage patch” look, and we played with her when we were children!

A lot of Amy’s jokes are self-deprecating and about her appearance, and audiences love that. It makes them feel better about themselves which is why many female comics always downplayed their looks over the years. Unfortunately, some of them had no looks to downplay in the first place! 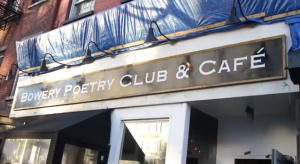 Anyway, I went down to the Bowery Poetry Club in NYC, to see Amy tape some new material for the as yet unnamed pilot she’s doing for Comedy Central. The place was packed to overflowing. They were nice enough to hold two seats for me. Unfortunately they were on someone else’s lap, but we all got along, and it was fine! (LOLOL)

Amy only gets cuter and cuter as her career rises. She says about herself: “Right now, on the hotness scale, I’m right where everybody thinks they have a shot!”

She says, ” People think I’m from the Midwest. I think I look like I milked something recently.” All her jokes seem to have a little sexual edge to them and it works great for her!

She also talks a lot about her Mom, Sandy who was there. She took me backstage to meet her, and they look very much alike. Amy did her best not to call her Mom the “C” word, but she just couldn’t help it! 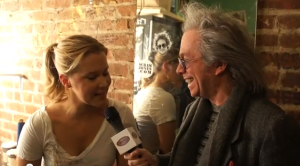 Jeffrey Gurian of Comedy Matters TV, having a blast backstage interviewing Amy Schumer, after the taping of material for hew new pilot on Comedy Central!

I always like to meet comic’s Mom’s, especially when they talk about them in their act. Sandy looked like she had a great sense of humor, and for a big career in comedy, you let your daughter call you the “C” word! (LOL)

When Lisa Lampanelli introduced me to HER Mom, she too said she didn’t care. And neither did her Dad who was there in the audience when she referred to him as an ” old, blind bastard!”. Wasn’t that a rapper??? Old Blind Bastard? OBD??? No???

The opening act was Kurt Metzger another comic that everyone loves, despite the fact that he looks nothing like Amy Schumer! Kurt is a wordsmith, and comes up with phrases you don’t hear too often but which are guaranteed to be funny, like when he commented on some guy in the audience sporting a “jaunty Captain’s hat”, which he deemed a real hipster look! ( Now you get the joke above! LOL )

Some words are just funny! They’re “comedy words”! Like, chances are that any joke you write with the words “divining rod” in it will get laughs!

I recently did a fun video interview with Kurt when he was on Anthony Anderson’s 3rd Anniversary Mixtape Comedy Show. You can check that out right here:

And after the taping, Amy was kind enough to spend a few minutes with me to tape a little exclusive video for Comedy Matters TV! And surprisingly enough, that’s right here:

Amy always told me she was grateful for my support and not more than a couple of months ago said to me, “Jeffrey, if I ever get my own show, … you can count on watching it from your living room!”

I know Amy’s show will be a big hit, and I can’t wait to start watching!