When I heard that Artie Lange would be making a guest appearance at the Comedy Juice show at Gotham, I made sure to get down there. Artie is an old friend and I hadn’t seen him since before he went to rehab. I went in hopes of shooting a little video with him for Comedy Matters TV, and we were able to do that in the Gotham’s downstairs green room. 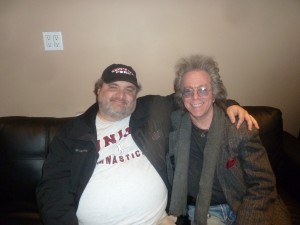 It was a great interview where Artie spoke candidly about his 3 month stint in rehab, kicking heroin, and how he’s now focussed on just getting healthy, and losing the 70 pounds he gained while he was there. Food is definitely a drug as many people can attest to!(LOL)

One of the most interesting facts that Artie shared with me on video is that after 25 years of performing stand-up, he almost prefers when he does a bit and the audience DOESN’T laugh! I found that insight fascinating.

He also had some great things to say about Jimmy Fallon!

You can see it all right here :

And check out our previous story on Comedy Juice and Artie Lange as well!