Millennium’s "The Babymakers" At The Friars- Opens August 3rd

Charlie Prince and his team always manage to get great films for the Friars Club Film Festival, coming up in October, but also to screen at The Friars Club itself. He even manages to get stars and producers to show up for Q & A’s. 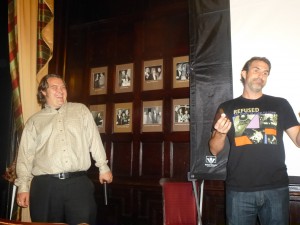 Charlie Prince having a great time with Paul Schneider at the Friars Club screening of “The Babymakers!”

So even though I just got back from Montreal from being an official videographer at the Just For Laughs Festival and was exhausted from shooting over 35 video interviews with celebs like Bob Saget, Chelsea Handler, Howie Mandel, Adam Carolla, JB Smoove, and Triumph The Insult Comic Dog, I made sure not to miss the screening of “The Babymakers” starring Paul Schneider from NBC’s Parks and Rec, Olivia Munn from The Daily Show, Magic Mike, and HBO’s “The Newsroom”, actor/Babymakers producer Kevin Heffernan, and actor/Babymakers director Jay Chandrasekhar.

The Friars Club flier announcing the screening of “The Babymakers!” 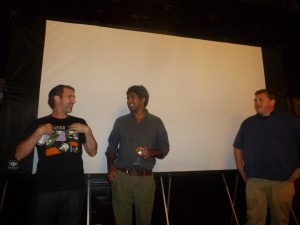 (L-R) Paul Schneider, Jay Chandrasekhar, and Kevin Heffernan at the Q&A at The Friars Club for “The Babymakers!”

Paul, Jay and Kevin were there, and it was obvious from the way they got along that they had a blast doing this movie.

Jay and Kevin are two of the founding members of the comedy troupe Broken Lizard, and are friends since attending Colgate University together. Even as a screenwriter who creates characters, two nicer guys would be hard for me to imagine, and they both have great comedic presence, even while just doing a Q & A. 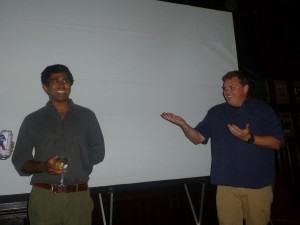 Actor/producer Kevin Heffernan making Jay Chandresekhar and everyone else laugh during the Q&A for The Babymakers at The Friars Club in NYC!

I had the treat of seeing them perform last night at The Bowery Ballroom to a packed, SRO crowd, and they were the same. Both of them have great comedy voices, if you know what I mean. Not every comic has a great comedy voice, but when these guys speak, their voices command attention, (and laughs!)

This film is the latest in a line-up from Broken Lizard that includes Super Troopers, Club Dread, and Beer Fest. In Super Troopers they played highway patrolmen who played tricks on people they stopped for speeding. Some of them were things I would do myself, like seeing how many times you could say “meow” to someone during a conversation, while denying you’re saying it.

Jay and Kevin actually guzzled two bottles of Maple Syrup each, during the filming of Super Troopers, which to me shows great commitment to their craft! The stomach-aches must have been intolerable.(LOL) After the second bottle, Jay found himself on the floor in a fetal position vowing to never do that again. He said he finally ran to the rest room, and he thinks he “passed” a sparrow!

In Babymakers, Paul Schneider plays a guy named Tommy Macklin, who’s finally ready to try and get his wife Audrey (Olivia Munn) pregnant, but to his dismay, finds out he’s shooting blanks. With the help of his friends, he decides to rob a sperm bank that holds a sample of his from earlier days when his sperm was still viable. 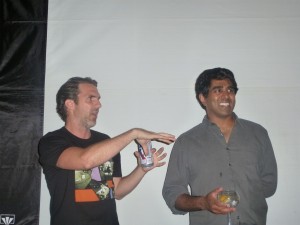 Jay Chandrasekhar plays a guy who’s supposedly a member of the Indian Mafia, and who agrees to lead the sperm theft! His Indian accent is right on, and I guess he comes by it naturally! 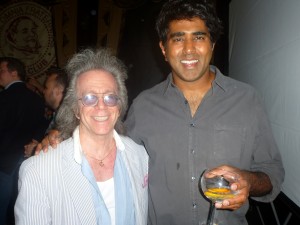 Jay Chandrasekhar and Jeffrey Gurian of Comedy Matters TV at The Friars Club for a screening of Jay’s new film “The Babymakers!”

He, Russell Peters, Aziz, and Kal Penn have broken down stereotypes, by showing how funny Indian people can be, which I love.

A sperm bank in general is a funny concept! It’s basically the only bank where after you make a deposit you LOSE interest! And I once wrote a Friars Roast joke, (maybe about Lisa Lampanelli?), that she just got a job as the night depository slot for an all night sperm bank!

Anyway, this movie is very funny, with lots of unpredictable situations, including Kevin getting to slip and slide his way through a roomful of sperm, so if you want some really good laughs, check out the film that opens tomorrow Friday, Aug. 3rd, in theatres nationwide!

I’m just fascinated that five guys who are friends from college actually get to make feature films together! To me that is AWESOME!

And stay tuned for the great video interview I did with Jay and Kevin at the Soho Grand Hotel, which will be up in the next few days! 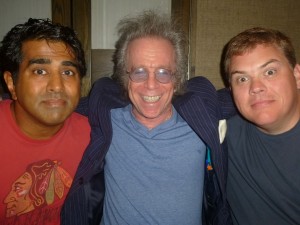 Jay Chandrasekhar, Jeffrey Gurian of Comedy Matters TV, and Kevin Heffernan at the Soho Grand Hotel in NYC talking about “The Babymakers!”