If it’s Tuesday night and 10 P.M. you can usually find me at the Comedy Juice show at Gotham.  It’s a long running show that started in California, and in New York a funny guy named Rus Gutin books the show and also performs in it as well.

Since Christmas Eve falls on a Tuesday this year, Comedy Juice was moved to Monday night, and let me tell you the audience definitely got their money’s worth tonight.  Rus Gutin was the host and he did a great job.  It’s very hard to host a show.  <Much harder than it looks because you have to warm up the audience and get them ready for the comics they’re about to see.  Then you have to keep things moving along to make sure it all goes smoothly. 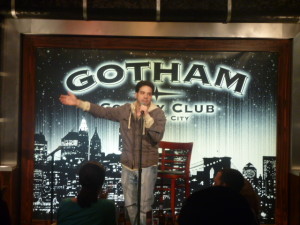 First up was Nikki Glaser, late of MTV’s Nikki and Sara Show which I got to see a couple of times, and which I thought was a really fun show.  My boy Ardie Fuqua was the warm up comic and if anyone can warm up a crowd it’s Ardie Fuqua!

Nikki talked about the MTA announcement on the subway which warns female riders ” A crowded train is no excuse for an improper touch. Don’t stand for it or feel ashamed, or be afraid to speak up. Report it to an MTA employee or police officer.”, and remarked that in order for there to even be such a message, some perv had to have used that as an excuse for groping women.  “The train was so crowded.  I had no other place to put my hands!” 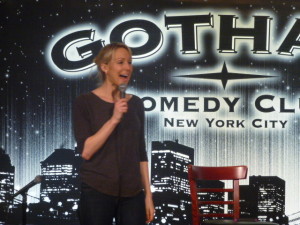 The Stone Brothers, Todd and Adam Stone were on next and they killed it like they always do.  I happened to be sitting next to them before they went up and Rus told them to do 10 minutes and then kiddingly added, ” Five minutes each!”  Anyone who’s ever seen the Stone twins perform knows they spend a lot of the time talking at the same time, so I told them if they do that, it’s more like they’re getting 20 minutes! (10 minutes each!)

Adam said he wanted to lose some weight and his doctor told him he had to do something that would elevate his blood pressure for a good 20 minutes, so he goes to his local Duane Reade and starts shoplifting for 20 minutes and then puts everything back!  Of course he does cause he’s a nice Jewish boy! ( His brother Todd claims to be Jewish too!  Small world!) 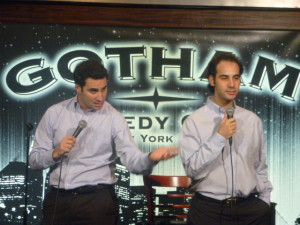 Adam (left) and Todd Stone being funny for Comedy Juice!

It was good to see Nic Novicki again cause he spends most of his time ou in LA where he lives.  Nic has been in so many films and TV shows lately, but he’s best known for his turns on HBO’s “The Sopranos”, and Boardwalk Empire where he played a little person boxer,  The first time I ever met Nick was at a party on Long Island and he accidentally spilled a drink on me.  Ordinarily I’d be upset about something like that, but Nic was so nice that we became friends.

He told a funny story about going to a party dressed as a penguin, with his girlfriend, also a little person and dressed as a penguin and he fell down the stairs and broke his arm, and hurt his leg and people thought he was just trying to waddle like a penguin. 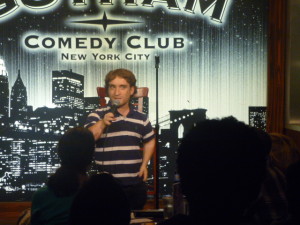 Mike Lawrence said he recently got engaged, and was warned by people that it would ruin his sex life.  On the contrary, he claimed it would GIVE him a sex life!  My biggest shock was finding out that he’s Jewish.  Jews can usually spot other Jews right away.  His Jewishness was hidden by his beard which is definitely not a beard of the Hebraic kind, but more like a Brooklyn hipster beard. 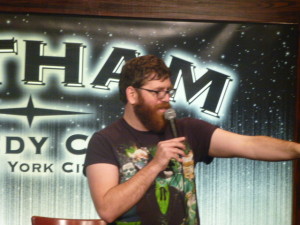 Mike Lawrence in profile offering a great view of his elegant, and voluminous beard!

Mark DeMayo was a cop for 20 years and just retired last year.  Now he can tell jokes about being a cop.  While he was on the force he wasn’t allowed to, and as he told me when they tell you you can’t do something, you can’t do that thing!