Andy Engel produces New Talent showcases at Gotham Comedy Club as he has been doing successfully for many years now. All you have to do is to look at the testimonials on his Manhattan Comedy School page to see how respected he is within the comedy community.
http://www.manhattancomedyschool.com/talent-shows/
This time he produced a comedy seminar open to the public, to anyone with an interest in comedy. I came by to “support”, and was not surprised to see a packed room, and I think the main room at Gotham holds over 300 people. I also saw lots of comedians I knew. The moderator was Gotham owner Chris Mazzilli, who I like to call “The Classiest Guy In Comedy.” Chris has been known to wear a suit and tie to the beach! (JK, … LOL) 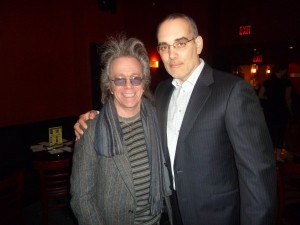 Also on the distinguished panel was JoAnn Grigioni, the talent executive from Comedy Central, who I had just seen earlier that day at Amy Schumer’s taping for her new Comedy Central pilot, Conan Smith former agent and now an executive at Apostle Entertainment which is Dennis Leary’s production company, and loved and respected comic Ted Alexandro. 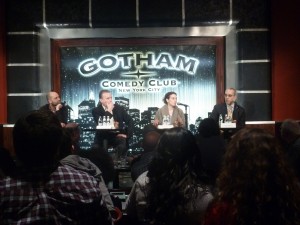 It was a question and answer session and people got the opportunity to ask whatever they wanted. Questions ranged from how to behave on the road, to how much money you could expect to make as a comic starting out! Ted said he doesn’t think he got paid anything at all the first three years he was performing. 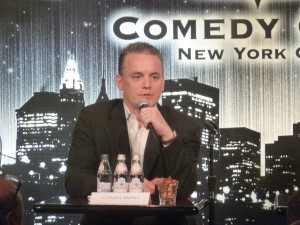 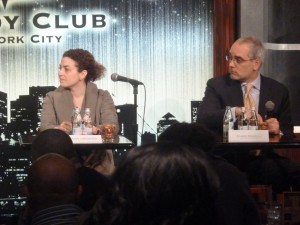 They all agreed that you don’t go into comedy for the money, but that money follows success. Talent finds a home and if you’ve got it, eventually someone’s bound to see it!

Everyone’s answers were honest and insightful. It was a great panel covering all aspects of the comedy world.

I think the seminar was a great idea, people learned a lot and really enjoyed it, and I have a feeling that there will be more of them! Are you listening Andy??? (LOL)