Dean Edwards is one of those rare guys who starts out strong and gets even stronger the longer he’s on stage. When most comics are winding down, he’s just getting started. Last night at Gotham, the room was so packed they almost had to put strangers at my table! (LOL) That’s packed! 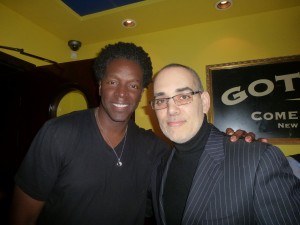 And Dean greeted me warmly when I came in which made it even more special. Then he told me had had my book ” Make ‘Em Laugh” and that made it even better, and then he topped that by telling me he was in Barry Katz’s office out in LA and when he walked in Barry had my book on his desk!

Barry is one of the co-creators of Last Comic Standing and one of the top comedy managers in the biz. Last July in Montreal we did a “two-hug interview” for my Comedy Matters TV, which you can see right here. A “two-hug” interview by the way, is a very rare occurrence! (LOL) This may be the only one in existence!

Dean and I will always have a special moment that we shared because I was standing with him in Montreal during the Just for Laughs Festival when he found out he had gotten SNL. It was very exciting for me, so I can only imagine how HE felt! (LOL) 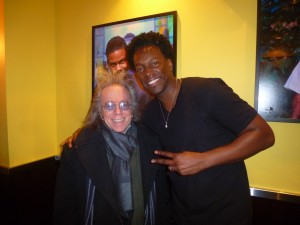 Dean Edwards and Jeffrey Gurian from Comedy Matters TV outside the showroom at Gotham Comedy Club! 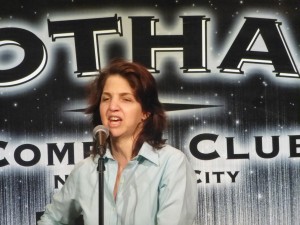 Like when they were riding in a cab where the driver was wearing a turban, and her little six year old son asked, ” Mommy, why is a genie driving our taxi?” That is hysterical! I’m sure the driver had no idea what that meant either! (LOL)

And when her older 8 year old son told her something he liked about her that was kind of a backhanded compliment she answered with, “And the only think I like about you more than your little brother is that your school day is longer!”

Harris Stanton came up next and he too is always a crowd pleaser. He was also very close to Patrice Oneal and was on Patrice’s last big show when he taped “Elephant in the Room” down at the Skirball Theatre. I used to see him a lot when I was hanging out at CB’s Comedy Club down on Macdougal Street!

Anyway he totally brought his A-game to the stage, and talked about how New York has changed him since he was a polite young man who came here from down South. Now he raced a woman to a seat on the subway! 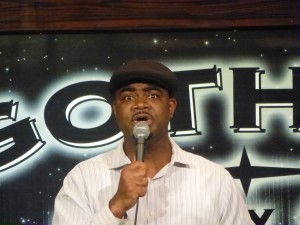 And I like when he does a bit about how people shouldn’t complain if they get hurt being someplace they’re not supposed to be, and he directed this remark mostly to white people. Like if a guy gets bit by a shark. Harris is like, “Where were you when it happened? In the ocean? Well you see that’s the problem. You were in the shark’s home. If you got bit by a shark in the supermarket, I’d feel bad for you, but if you go into the ocean where you don’t belong, you gotta expect that to happen.

Or when guys get lost climbing a mountain. Another white guy thing! You don’t read about Black guys getting lost in an avalanche, or being attacked by a shark while surfing. Only white guys do stuff like that!

Rich Francese always has great lines and he was up next. He said he thought his wife was cheating on him, because the other day he caught her belittling another man! That’s really funny! 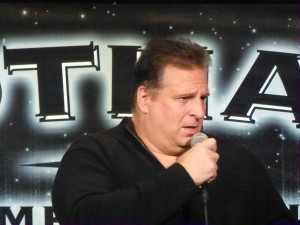 He also said he didn’t get the concept of an ‘intervention”. At an intervention the alcoholic or drug addict is surrounded by his parents, relatives and loved ones. Aren’t those the people who made you drink and take drugs in the first place?”

Dean’s audience was waiting for him, and he hit the stage to resounding applause. He talked about lots of different things. Like people who read the NY Times always want you to know they read the NY Times! “Like, … I saw this article in the NY Times, …”

Personally the NY Times makes me nervous. Especially the Sunday edition. I always feel like I’m gonna have to cut out articles and summarize them for the next day as “Current Events” homework! I still hate Sundays because of that memory!

If you take a moment to watch this you’ll see a little film I made some years ago as part of The “Men Who” Series, about men who do very unusual things. It’s called “Men Who Dance In Traffic With The Sunday Edition of the NY Times.” That’s about all it’s good for! (LOL)

In talking about women, Dean says he wants a woman so fine that when she enters a room, she has her own theme music, and it plays automatically!

He did a masterful piece which got an applause break about being the only Black guy on a flight to Russia, where they thought he was Kobe Bryant, and he imitated the Russian accent like it was a Grinch song backwards. 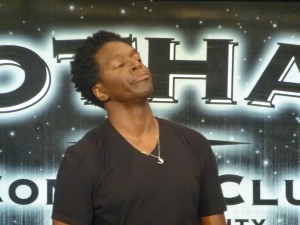 Dean Edwards showing lots of expression during his sold out headlining gig at Gotham!

Accents and impressions are a real strongpoint for Dean, and his Eddie Murphy is only surpassed by his Denzel Washington which he used to close the show the night I saw him.

In talking about Kim, Khloe, and Kourtney Kardashian he said that never in this country have Black men been so supportive of the KKK! And that Kim Kardashian has taken out more Black men than Sickle Cell Anemia! That is HYSTERICAL!

On comparing his Associates Degree education to that of his wife who is a professional, with a Post-Graduate degree, he said an associates degree is like a receipt that you were in the building, … nothing more! Nothing to brag about!

He even does impressions of animals! When he described Beyonce as being so fine she was like a stallion, he pranced around the stage clip-clopping like a horse.

But ending on introducing his wife to Denzel Washington was the piece-de-resistance, that proves what an “artiste” Dean Edwards is! Plus he’s the nicest guy you’d ever want to meet!