Domesticated Primates Don’t Monkey Around ( At The PIT)

The People’s Improv Theatre better known as The PIT, along with UCB is like the epicenter of “hip”, alternative comedy these days. I’ve been seeing some very cool things there and the other night I got the chance to see a series of vignettes (if that word is still used anywhere!) called “Domesticated Primates”, which compares our mating habits, and ideas of sexuality to those of monkeys, our closest relatives in the animal kingdom!

This series of sexy,funny sketches starred four actors I think you’ll be seeing a lot of, Corinne Fisher, who is also a stand-up comic, and Improv performer, Kaira Klueber,(who for some reason pronounces her first name “Kara”! The “I” is silent, but if you leave it out, it makes her name too loud! It’s like the extra “A” in Aaron! LOL), the very funny Brian Berrebbi, and a multi-talented actor who goes by the name of Jonesy! 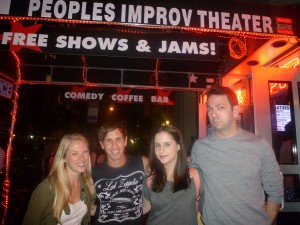 (L-R) Kaira Klueber, Jonesy, Corinne Fisher, and Brian Berrebbi outside at The PIT. Their show however was INSIDE at the PIT, (cause it’s easier to perform inside than in the street!)

All four of them are very funny and have great stage presence! And it doesn’t hurt that two of them are really pretty! With great smiles! ( Guess which two I mean!) LOL 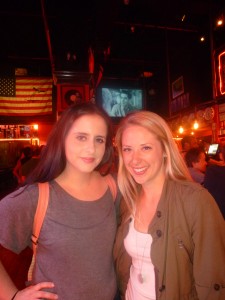 The sketches examine how our male and female roles have developed in our modern day society, and whether monogamy is a natural state for human beings, since it only came about as a concept a mere 14,000 years ago. Before that it was one long party!

If you get a chance to see this show or any of the performers in this group, drop whatever you’re doing at the moment, (or put it down gently!), and run straight out of your door to see them. And make sure to tell them I sent you!