"Make ‘Em Laugh" With An Intro By Chris Rock

After four years of work, my book “Make ‘Em Laugh” with Richie Tienken, owner/founder of the legendary comedy club The Comic Strip finally came out, and is in bookstores all across the country. 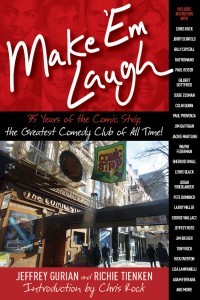 It’s about the 35 year history of the club which Richie opened on June 1, 1976, and which is still going strong. I got the idea for it back in 2008 while at the club one afternoon with Ann Curry and Gilbert Gottfried, coaching Ann on how to do stand-up comedy for some event she was doing, and I suggested to Richie that we do a book on the club. 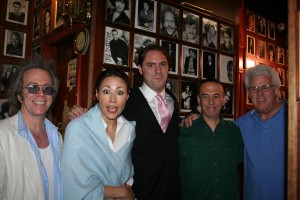 It took three years to get all the interviews and transcribe them from the digital audio recordings, because I did it all by myself. Every word. Every single word. It takes a long time to listen to an hour long conversation, which most of them were, if not longer, and transcribe every single word, by constantly pressing “Repeat” and playing each sentence over and over again to make sure you got it correctly.

That first summer, I went up to the Just for Laughs Festival in Montreal and got the first three interviews with Larry Miller, George Wallace and Paul Provenza. 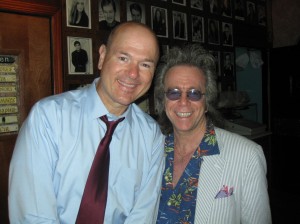 Larry Miller with Jeffrey Gurian at The Comic Strip! 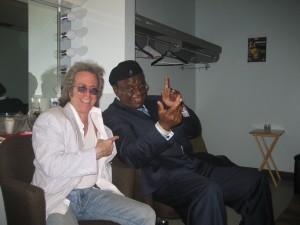 Jeffrey Gurian of Comedy Matters TV backstage with George Wallace at Just for Laughs in Montreal, the biggest comedy festival in the world!

At the end besides having a killer, hilarious introduction from Chris Rock, I had interviews with Jerry Seinfeld, Billy Crystal, Ray Romano, Paul Reiser, Gilbert Gottfried, Susie Essman, Colin Quinn, Paul Provenza, Jim Gaffigan, Lewis Black, Judah Friedlander, Lisa Lampanelli and many more! A book filled with stories from comedy legends on how they got their start and wound up at The Comic Strip. 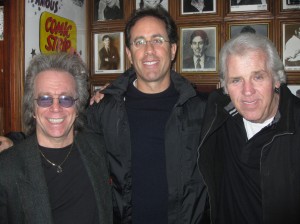 Jeffrey Gurian, Jerry Seinfeld and Richie Tienken at The Comic Strip after Jerry’s interview for the book! 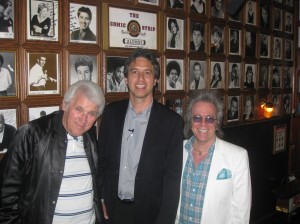 Although Gilbert Gottfried claimed he had never actually been there and just showed up to the interview for a free lunch! He did admit to having heard rumours around 1974 that a club would be opening so he stood in that spot for years waiting for it to open, and he heard it did eventually open and had electricity. He also heard that many comics came there for dessert, at which point he started yelling out to no one in particular that he wanted a Peach Melba! 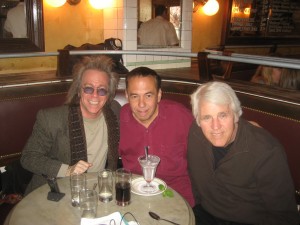 Jeffrey Gurian of Comedy Matters TV, Gilbert Gottfried, and Richie Tienken trying to get Gilbert to admit he had ever performed at The Comic Strip!

This was as Richie Tienken was getting nauseous after having paid $50. to park, and was picking up the tab for lunch, to hear Gilbert say he had never been to the club. Needless to say, the interview was pure Gilbert, and hysterically funny.

I flew to LA to interview Billy Crystal, and that was really a treat. I hadn’t seen him in many years, and we got to reminisce about the days when I was a dentist and his manager at the time, the legendary Jack Rollins, who also managed Woody Allen and Robin Williams, wanted him to play me in a sit-com about a dentist in show biz. 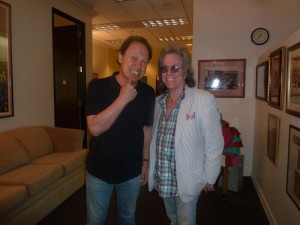 Jeffrey Gurian of Comedy Matters TV with Billy Crystal in his offices in Beverly Hills! Billy is pointing to his teeth referencing Jeffrey’s former life as a dentist!

Most of the interviews were done at The Comic Strip because Richie and I felt it would be advantageous for the comics to be in that environment because it would help to bring back memories and it did.

We got to hear great stories like how Chris Rock was discovered by Eddie Murphy in 1986 when Eddie was considered the biggest star in the world and was being managed by Richie at the time. Or how Ray Romano started his career under the name “Jackie Roberts” for the first two or three months.

Then he “bombed” one night and experienced stage fright, so he quit and went back to selling futons for his best friend, which became an episode of “Everybody Loves Raymond!” Two years later he returned to comedy at The Comic Strip under the name Ray Romano and the rest is history! 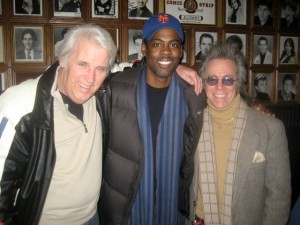 Interestingly enough, he even delivered a futon to Larry David who was already well known and true to character, was not happy with the futon, and made Ray take it back.

We have Jerry Seinfeld’s first sign-up sheet on the night he auditioned to perform at The Strip on June 17th, 1976. In those days you were rated, and Jerry was rated “Good” and then someone wrote, ” Definitely put on Monday, 6/21.” That person was smart!

And blurbs! You wanna see blurbs? I got so many celeb blurbs they almost had to use a separate page. I got blurbs from Judd Apatow the king of Hollywood comedies, Richard Lewis, Charles Grodin, Nick Kroll, (whose new “Kroll Show” comes out on Comedy Central in January with me on it!), Bob Saget, (who was kind enough to write: “No matter how many years pass, I can never say no to Jeff Gurian. Hence this quote on his book’s back cover!”) Plus Tom Papa, Danny Aiello, Mike Birbiglia, DJ Cassidy and more! 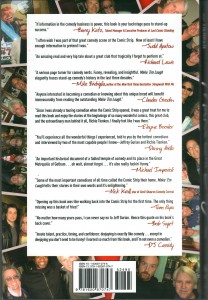 Since the book came out we’ve been getting a lot of attention. Tons of press. A great review from Larry Getlen in the NY Post, an interview on NBC TV, Channel 4, 7 P.M. news with Roseanne Coletti, an interview with WPIX TV, Channel 11 with reporter Dan Mannarino, which will be airing the week of Dec. 10th, radio interviews with Judith Regan, and Ron Bennington of “Ron and Fez” on Sirius Radio, plus radio shows all over the country.

And the book is in the hands of lots of huge comedy stars like Chris Tucker, JB Smoove, Artie Lange, Colin Quinn, and Judah Friedlander to name a few! 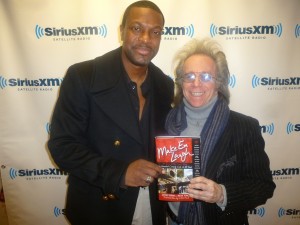 Chris Tucker and Jeffrey Gurian up at Sirius Radio with Chris’ copy of the book ” Make ‘Em Laugh”! 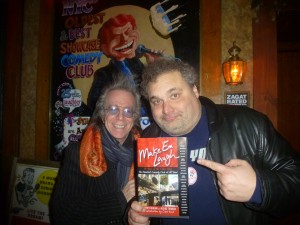 Jeffrey Gurian with Artie Lange at The Comic Strip with Artie’s copy of the book ” Make ‘Em Laugh!” 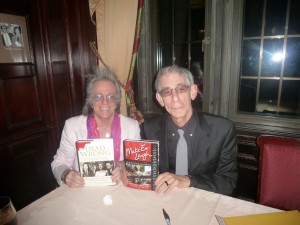 Jeffrey Gurian of Comedy Matters TV with Richard Belzer at The Friars Club. Jeffrey is holding Richard’s book, and Richard is holding his copy of Jeffrey’s book “Make ‘Em Laugh!”

The book is available in all Barnes and Noble stores in NYC, and on Amazon.com

Coming up, I’ll be doing a guest spot on Artie Lange’s new podcast with Nick DePaolo, talking about the book and all things comedy!