Last night I was at a show produced by Scott Kluge for the Birthright Israel Foundation, a wonderful educational program that sends young Jewish adults on all expense paid trips to Israel, to diminish the growing division between Israel and Jewish communities around the world, and to strengthen the sense of solidarity among world Jewry.

It was a star-studded show with two of the funniest Jews I know, Gilbert Gottfried who was the host, and Dave Attell who performed along with an all star Broadway cast.  Associate Producer was my good pal comedian Ray Ellin and the hilarious Dan Naturman was a writer on the show. 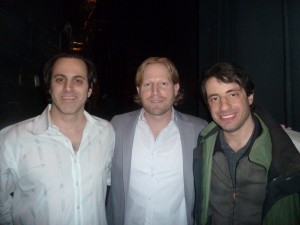 Gilbert read the story of Purim putting in his own hilarious facts like Nebuchadnezzar not being able to get online, and change his status on his Facebook page.  In between he would introduce the next act, and then go back to his readings.  It looked like he was reading from The Torah. 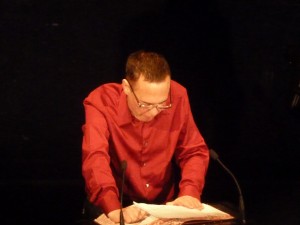 Gilbert, in his best red shirt, looking like he was reading out of The Torah, onstage at The Hudson Theatre.

Dave Attell came out looking like a Russian peddler from the early 20th century, which is a look he pulls off well.  He was his usual hysterical self, and had lots of Jewish humor.  I wasn’t taking notes as I usually do but I believe when talking about brisket he said, ” I don’t think any kind of meat should be wetter than the front row of seats at a Justin Bieber concert.” 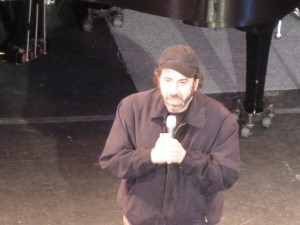 And then it got raunchier and the audience loved it!

In the all-star Broadway cast was Mitchell Jarvis, Nick Adams from the brand new Priscilla Queen of the Desert, (which I almost wrote as “Queen of the Dessert”, … which could be about Lisa Lampanelli before she lost all the weight!); Curtis Holbrook from West Side Story, Kelli Barrett from Baby It’s You, Garrett Long from South Pacific, Rachel Potter from The Addams Family, and my good friend, the beautiful and talented J.Elaine Marcos, also from the show opening next Sunday, Priscilla Queen of the Desert. 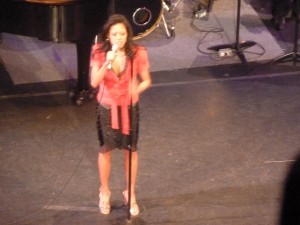 J.Elaine as she started out her number fully dressed!

J.Elaine came out on stage and did a number that was so sexy and adorable.  She sang in an accent, and danced around while taking off her clothes to the delight of the audience.  First her sweater, then her blouse, and just as she reached behind her to unclasp her bra, … the lights went out! 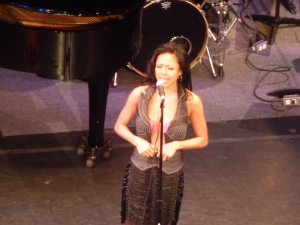 J.Elaine beginning to disrobe on stage during her number! 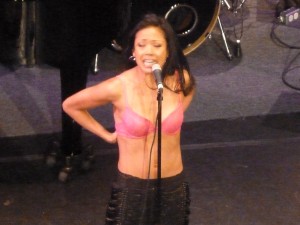 J. Elaine just about to undo the clasp of her pretty pink bra!

J. Elaine and I had met years before in a comedy class and she has always been very funny. Sexy and funny is a difficult mix but she manages to pull it off.  She’s also been in in Chorus Line,(which I saw and she was fantastic), The Wedding Singer, Sweet Charity, and Flower Drum Song, among others. 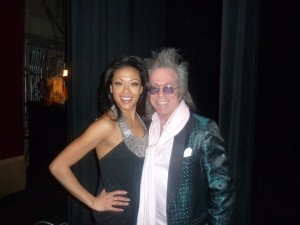 J.Elaine Marcos and Jeffrey Gurian both completely dressed backstage after the show!

She was as shocked to see me backstage as I was to see her onstage! 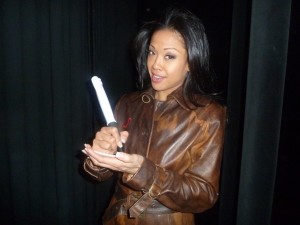 Anyway,  I’m sitting enjoying the show when all of a sudden I get a text from my fabulous PR team Goldman-McCormick asking me if I could do a radio spot at 10:07 about Gilbert Gottfried being let go as the voice of the AFLAC duck, for what they felt were insensitive Tweets made regarding the devastation in Japan.

I was like,” I’m here with him now.”  Basically that can’t even happen!  What are the odds that someone would want to talk to you about someone you were with at the moment?

When the show ended I went backstage to see Gilbert, which I would have done anyway,because he has always been my favorite comedian, and he knows that.

I’ve been telling him that for years.  He was with his wife Dara, and I had just seen them last week at the taping of the Donald Trump Roast airing tonight at 10:30 on Comedy Central, btw!

I asked him if he wanted to come on the radio with me, but he told me that I could speak about it for him.  I could tell he felt badly about what happened.  Gilbert doesn’t have a mean bone in his body.  He might not offer to buy you a drink, but he would never purposely hurt anyone.

People who love Gilbert know what he does.  Not only does he push the envelope, he tears it to shreds.  Look at his performance in The Aristocrats. When Gilbert goes off the deep end, nobody can go any deeper.

Comedians see the world in a different way than most people.  That’s what allows them to see the humor that other people overlook.

Unless you’re there to see if for yourself, no one can possibly grasp the horror of a cataclysmic event like the one that happened in Japan.  You can’t really wrap your mind around it.  It’s too big.

Plus, people don’t have the capacity to feel other people’s pain.  It’s a blessing and a curse at the same time.  We would probably be incapacitated, and catatonic if we felt what other people were feeling.

It might also make for a kinder world, if people knew how their words affected others.  Children can be very cruel as we all remember from our early days in school.  They think it’s fun to single out one person and make their life utterly miserable.  I know I did it too, and I cringe today when I think about it.

Comics are very often extremely socially awkward and not well versed in social graces. They’re the first to admit that they were the guys, ( and girls!), who didn’t exactly fit in in high school.  Many were self-described nerds.  They used comedy to survive, and so their personalities only exist on stage.  Off stage they’re often very quiet, and even very shy, which is hard to believe when you see how animated and funny they are on stage.

They learn to say anything to get a laugh and often at other people’s expense. Shock value is getting harder to find because it’s all been said and done already.

Anyway, as of the time of the writing of this entry, I’ve already done two big radio shows about this today with two more scheduled.  I did the Bob Dutko Show on WMUZ coming out of Detroit, which is a Christian Radio station, and that was lots of fun.

The Bob Dutko Show WMUZ out of Detroit! Really fun show to do!!!

The Big 810 show with Ed Tyll out of Orlando, Florida. Ed's a great host!

Then I did The Big 810 out of Orlando, Florida with Ed Tyll, on WEUS, and we spoke for quite a while on the mindset of comics and how they think.  Also, AFLAC has a tremendous business in Japan and for that reason alone could not take a chance and alienate anyone, despite the fact of how much they like Gilbert.

Gilbert has been open about his apologies and has posted them on Twitter, like the ones below.

“I meant no disrespect, and my thoughts are with the victims and their families.”6 hours ago · reply

“I sincerely apologize to anyone who was offended by my attempt at humor regarding the tragedy in Japan.”6 hours ago · reply

So all in all it was a busy day, and I’m learning to like this blogging thing. People have been telling me for years that I should be blogging, but I didn’t get the significance of it till last week!  Now I can’t stop.  It’s addicting!!!

Let me know your thoughts on the Gilbert/AFLAC Tsunami thing.  Curious to hear your take on it.