Keith Robinson is often called a “comic’s comic”, which means he’s very highly respected by his peers.  In the world of comedy that means a lot.  Because from the time they start out, all comics want to feel like they’re the funniest of all, and because of that they often don’t encourage their peers!  A lot of comics don’t even take the time to say ” Nice set” after another comic performs.  It’s such an easy thing to do, and means so much to a fellow hardworking comic, but out of fear, they keep it to themselves. 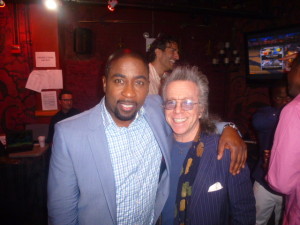 Keith Robinson and Jeffrey Gurian backstage at The Gramercy Theatre in NYC after Keith’s killer show!

I make it a point of telling other comics when I think they did well.  We all need encouragement.  Anyway, I digress! (LOL) Kevin Hart, who’s career is absolutely HUGE, and getting bigger by the moment, produced a Keith Robinson special called ” Back of the Bus Funny”, at the Gramercy Theatre in New York City.

But not only did he produce it,  he came out on stage to welcome the audience before the show started, and said that Keith Robinson was his mentor and he wouldn’t be who he was today if not for Keith!  What a tribute!  And what a  great, and selfless  thing to do.  Kevin didn’t have to say that but he was being honest, and you could tell that he meant it! 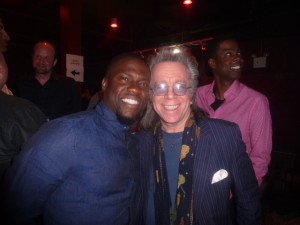 I got to know Kevin originally when I co-produced a comedy show at Westbury Theatre on Long Island starring Kevin back in 2010.  It was right after the earthquake in Haiti and we decided to make it a benefit for that ravaged island.  My partner was Haitian and I have a lot of Haitian friends, and thanks to Kevin we sold out the place.  Three thousand people came out to see Kevin kill it, with Tony Rock as the feature, and Haitian-American comic Wil Sylvince as the MC! Needless to say, a lot of them were late, (LOL), but they came, and that’s what counts! 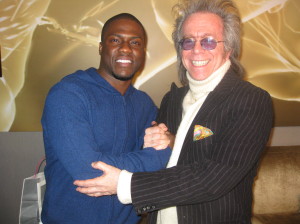 Kevin Hart and Jeffrey Gurian promoting their show at Westbury Theatre back in 2010!

So when I run into Kevin periodically it’s always good, and I’m really happy for his success!  He’s got 11.7 million followers on Twitter and will probably have more than 12 million by the time I finish this blog post! (LOL)  Two years ago, when I interviewed him for Black History Month,  he had only 3 million followers, and in two years time his popularity has grown so much, … I wish my investments would grow like Kevin Hart’s Twitter following!

Zainab Johnson opened the show and it was really cool because I had just seen her the night before on Last Comic Standing.  She’s got a shaved head, .. I don’t wanna say “bald” because “Bald” to me implies that you somehow lost your hair.  Her’s is obviously a fashion choice!  And it works for her.  She wore a belly baring outfit on LCS and did the same at Keith’s special.  The girl is proud of her abs! (LOL)  And she’s funny too,  so it’s a good combination all around, ’cause abs by themselves don’t fill seats!

The audience was packed and there were lots of Keith’s friends from his Tough Crowd days.  Colin Quinn was sitting in front of me with Chris Rock and Gary Gulman.  Next to me was Robert Kelly and Vondecarlo Brown, Patrice O’Neal’s wife.  Keith gave Colin a shout-out in a very funny, but backhanded way by saying there were people in the audience who used to be famous, like Colin Quinn, and nobody laughed harder than Colin.  Well that was the confrontational energy that Colin brought to Tough Crowd, and he told me once in an interview that  he wanted it that way! 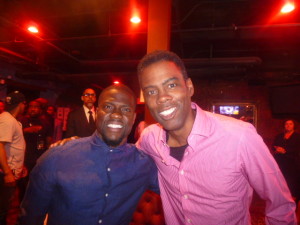 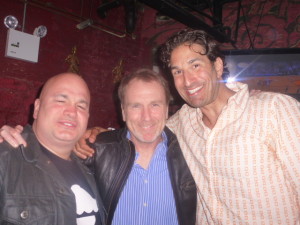 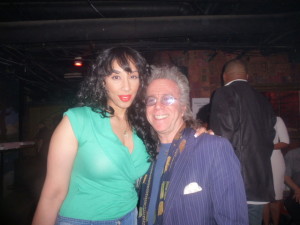 Vondecarlo and Jeffrey Gurian at the after-party for Keith Robinson’s show!

The show had a really cool set and Keith came out, literally from the back of a bus, wearing a very cool looking suit. 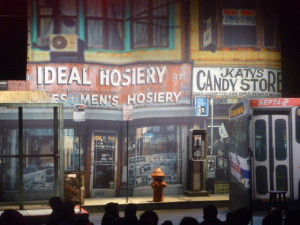 The backdrop of Keith Robinson’s set, where he stepped off the back of the bus to open the show!

He thanked Kevin, and mentioned that Kevin had a HUGE following on Twitter, and that probably 12 of them were white!   He said that Kevin was like “the Red Lobster of comedy”! (LOL) He went on for an hour with really strong material.  There were so many strong spots but I particularly like when he’s talking about the saying, ” Guns don’t kill people, people kill people.”  Now I’m paraphrasing here, but he says something like guns DO kill people.  if you wanna kill someone you use a gun.  No one goes around choking people.  There’s a reason you never hear of a mass choking!  And then he acts it out, like a guy’s sneaking up on someone to choke them, and it’s hysterical!

Many years ago, when I was writing for Weekly World News I did a story on a man who claimed to have personally killed every person in Manhattan!  He says he did it about two weeks before, and that he single-handedly snuck up on each and every person in the borough and strangled them, while under the influence of an entire pack of cigarettes.  Police spokesmen were quoted as saying they felt that the man either lying, or else he was covering up for someone else.  What the public wanted to know was, ” Who are police spokesmen anyway?  What kind of a job is it?  Are they actually policemen or just men who speak?  Has anyone you know actually ever met a police spokesman, and if not do they in fact exist?”

Anyway, after the first show we all went backstage to congratulate Keith and it was Chris Rock, Kevin Hart, Gary Gulman, Robert Kelly, Jermaine Fowler, Marc Theobald, Vondecarlo, Kevin’s posse, and lots more people eating, drinking and letting Keith know how good he was.  Then he had to split to do it all over again for the second show!  That has to be hard, following yourself on a really great performance!  Now they have to go to the next step! 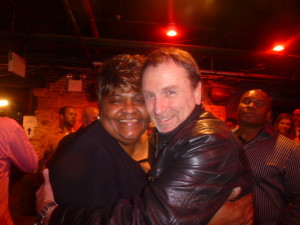 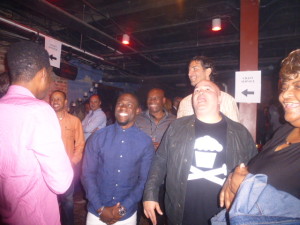 Everybody laughing and having a good time after the show! 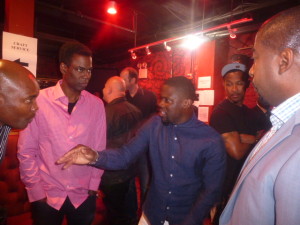 Another candid backstage photo of Kevin Hart and Chris Rock, with Keith in the foreground!

But  between Keith’s talent and Kevin’s heat they should have no trouble finding a home for this special!  I for one can’t wait to see it again!  It was a great night and very special to see Kevin and Chris again! 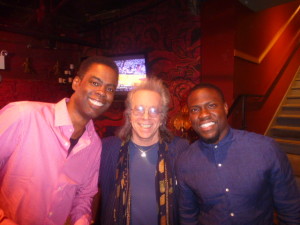