In the comedy world where backbiting and jealousy are so rampant, its nice to be able to feel happy for someone’s success. With Lisa Lampanelli I get that opportunity all the time. Lisa is a comedy superstar, who I’ve had the pleasure of knowing for many years now. 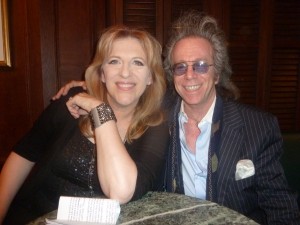 Lisa Lampanelli and Jeffrey Gurian at The Friars Club for Lisa’s singing debut!

I knew her when she was about 100 pounds heavier and as she lost weight over the years I sometimes worried that it might affect her career. If it did, it was only for the better, because now not only is she just hysterically funny, but she is also an inspiration for people who want to change their lives. 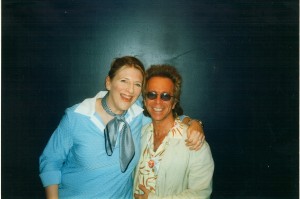 Lisa Lampanelli and Jeffrey Gurian back in the day, circa 2002!

It doesn’t take much incentive to stay the way you are. Anyone can do that. But to take your current situation and decide that you’ve had enough of living like that, and decide to make a change is a rare and admirable trait. Most people don’t do it. I did it in my own life, as a former severe stutterer, whose speech could easily have kept me from accomplishing anything in my life that had to do with speaking, which is just about everything!

Instead I drew on some inner strength I didn’t know I had, and by focussing all of my energy, and refusing to continue my life as a stutterer, I was able to conquer that “disability”, and go on to do many things where I use my speech in public, like appearing on radio and TV, performing, and addressing large crowds of people, none of which I would ever have done as a stutterer.

Lisa did that by having the courage and determination to change her appearance into the rich, glamorous woman she is today, and I’m sure she’s still pleasantly surprised every time she looks in the mirror, which I hope is a lot these days! (LOL)

She and her handsome husband Jimmy Cannizzaro, who has gone from looking like a building with clothes to just a garden apartment with clothes,
(and I mean that only in the best way!) (LOL) have done it together. It would have been too weird for just one of them to go through such a drastic change. 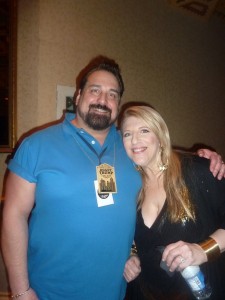 Jimmy Cannizzaro and Lisa Lampanelli at the Donald Trump Roast before they both went through their dramatic transformations!

Now her comedy is a whole other thing. She’s known as “The Loveable Queen of Mean”, which is a perfect title for her, as opposed to the “Queen of Mean” title that Leona Helmsley carried. It’s very fitting in Lisa’s case since in my mind she does a very important public service beyond making people laugh. She allows people to laugh at themselves before they laugh at each other.

Very few comics can do that, and the reason she can is because she comes from a place of love. You know that there’s no hatred in her heart for any ethnic group or sexual persuasion, which is why her comedy is so popular with every group. Russell Peters does something similar which is why I refer to him as “The Messiah of Comedy”. His audience is completely multi-ethnic, and within moments he has every group laughing at themselves and each other.

People can sense where you’re coming from when you say something and with Lisa they know it’s all in fun. This Friday, Jan, 18th she brings her unique talents to Westbury Theatre. I can’t wait to go and see her. When I spoke to her earlier this week she had this to say:

“I can’t wait to come back to Westbury Music Fair or whatever the f- that venue is calling itself today. Actually, when I play there, they should just call it the ‘T&A Theatre.’ No, that’s not short for ‘Tits & Ass.’ It’s short for Terrorizing and Antagonizing, which is what I do best! But for some reason people seem to be able to take it, and the people of Long Island are some of the best at that!”

The world needs Lisa Lampanelli. There’s too much Political Correctness and instead of bring people together, by making them respect each other, (which I think may have been the original intention), it’s actually divided people by making every group hypersensitive to the remarks of others. Lisa helps to break down those barriers and in doing so is doing a tremendous public service!

Lisa is also in my new book Make ‘Em Laugh” with Chris Rock about the 35 year history of the legendary comedy club “The Comic Strip” for which she gave me such a cool interview! 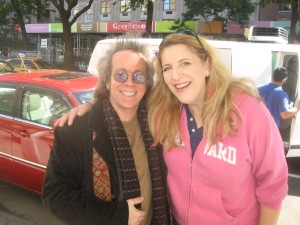 She’s even part of my ” Dancing With Comedians” series of photos, of which very few comics have made the cut! 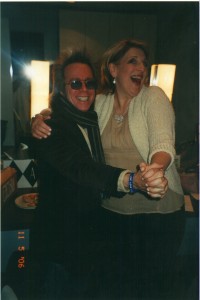 Jeffrey Gurian dancing with Lisa Lampanelli as part of his rare “Dancing With Comedians” photo series!

I can’t wait to see her at Westbury and then again at The Apollo at the end of the month! More on that to come!

For Westbury tickets, you can go to:

Or you can get tickets on Lisa’s website, which is also cool to experience, at http://www.insultcomic.com

No matter how you do it, just do it and look for me there, and come say “Hi!” If you don’t see me, it just means I’m backstage taking photos! (LOL)