I get to see a lot of fun projects before they hit the big or small screen, but this one from MTV was really super! As part of Comic Con NYC, 2011, MTV held a screening and a panel for it’s new animated show “Good Vibes” premiering Thursday, Oct. 27th, at 10:30 P.M. The panel was moderated by none other than Gary ( Baba Booey) Dell’Abate, Howard Stern’s longtime producer. 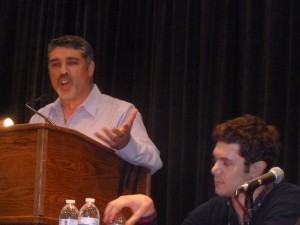 The series follows two high school surfers, Woodie, voiced by Adam Brody of The O.C., and Mondo, voiced by Josh Gad from The Book of Mormon, who live and surf in Playa del Toro, described as “a colorful Southern California beach community!” 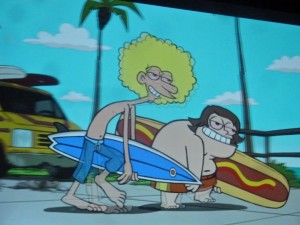 Woody (voiced by Adam Brody) and Mondo ( voiced by Josh Gad) on their way to the beach to do a little surfing and girl watching!

Mondo is really small and overweight, and Woody is tall and skinny with a huge blonde afro, and a big “penis” nose,( description by Adam Brody!), and like any other high school guys,… and maybe any guys at all for that matter, are obsessed with sex and pretty girls.

Almost everyone from the show showed up for the panel. On the production end there was David Gordon Green the creator of the show, and Exec. Producers Mike Clements, Brad Abelson and Tom Brady, all of whom appear in the video below. 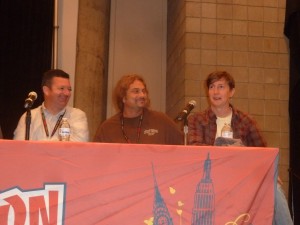 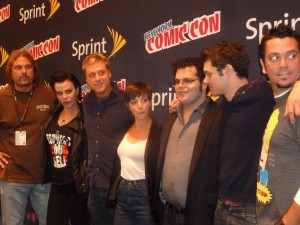 On the talent side there was Josh Gad voicing the part of Mondo, Adam Brody voicing Woody, the fantastically sexy Debi Mazar voicing the role of Mondo’s super-sexy Mom Babs, Olivia Thirlby, who had previously worked with David Gordon Green in the Judd Apatow movie he directed “Pineapple Express”, and Alan Tudyk from Joss Whedon’s Emmy award-winning TV series, “Firefly”. 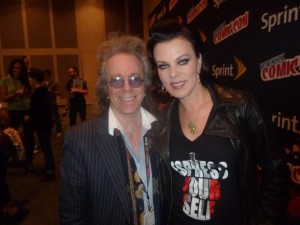 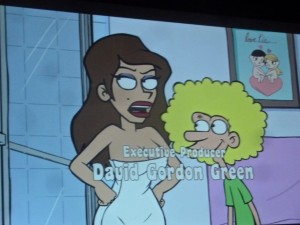 Babs (Debi Mazar) in a towel being drooled over by Adam Brody’s “Woody”, which is a perfect name for him! ( Especially in this scene! LOL ) 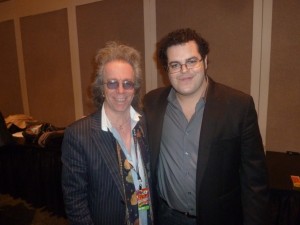 Check it all out right here and don’t forget to watch this Thursday, Oct. 27th at 10:30 ET/PT on MTV, right after the return of Mike Judge’s Beavis and Butthead!