My Synchronicitous Meeting With Larry David

People often tell me I know everyone in comedy.

If you watch this little video, you’ll hear Nick Kroll and Paul Provenza telling me exactly that, and until a few days ago my answer was always, ” Yeh, but I don’t know Larry David.”

For whatever reason, in all my years in the comedy world, our paths have never crossed, but I’m a huge fan and I always wanted to meet him.

So I’m at LaGuardia Airport , flying to Florida and who do I run into, … Larry David.  And he was alone.   And I was nervous to approach him, and I didn’t know what to say!

I turned into a little girl!   Only knowing his cantankerous ( I don’t think I’ve ever used that word before! LOL) character on Curb, I was reluctant to go over and introduce myself, not knowing what kind of response to expect.

I had been trying to reach him as recently as October 23rd to request a video message to Susie Essman, because I was producing a gala in her honor as part of the Gold Coast International Film Festival for which I was named “Head of Live Comedy Programming”,  and had gotten funny video messages from Richard Lewis, (which for a joke, we filmed in the Men’s Room of The Friars Club), Mario Cantone, and D.L. Hughley, but I couldn’t get to Larry.  I even have a friend who’s close to him but even he was reluctant to approach Larry, which made me even more nervous!

In D.L. Hughley’s interview, we made up to say something like, I tried to get J.B. Smoove and The Wayans Brothers but D.L. was the only one available. 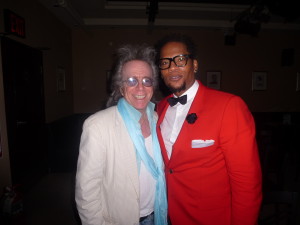 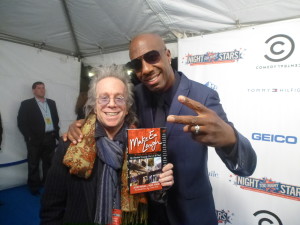 Jeffrey Gurian with J.B. Smoove on the red carpet of Comedy Central’s Night of Too Many Stars, holding Jeffrey’s book “”Make ‘Em Laugh” , with an intro by Chris Rock! 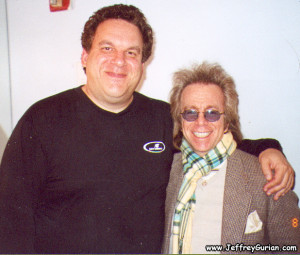 But I realized that I couldn’t pass up the opportunity.    I had to do it despite my nervousness.  What’s the worst he could say?   It felt like an episode of “Curb!”

To add to the tension, I was running out of time because he was walking towards his gate, with papers in his hand.  There was a terrible fog and everyone’s flights had been delayed for several hours.  I could tell by the look on his face that he was troubled which added to the tension of me approaching him.

Do I tell him that Jerry Seinfeld is in my book “Make ‘Em Laugh” that has an intro by Chris Rock?

Do I tell him I’m friends with Susie Essman, Richard Lewis, Jeff Garlin and J.B. Smoove, or will I just look like a name-dropper?

I realized I would have to do what I had been doing for most of my life, …. confronting my fear and doing something I was nervous to do.  It’s how I finally got up on stage to perform.

I knew that if I waited too long debating on what to say, I might miss the opportunity all together and never forgive myself, so I tapped him on the shoulder, which for whatever reason is where most people usually tap each other, when they want to get another person’s attention, and I said ” Hey Larry, I’m Jeffrey Gurian a comedy writer from NY and we have a lot of mutual friends!”

He was very friendly, gracious, and open and went and sat down while I stood in front of him talking to him.  The whole entire time, I kept wondering whether I was overstaying my welcome.  I got to tell him about the gala I produced in honor of Susie Essman, the video with Richard Lewis, how J.B. Smoove took a photo holding my book, that Jerry Seinfeld gave me an interview for, and he took it all in. 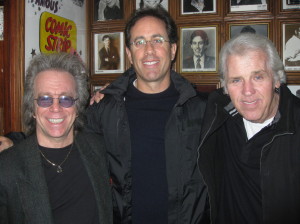 Jeffrey Gurian, Jerry Seinfeld and Richie Tienken at The Comic Strip after Jerry’s interview for the book “Make ‘Em Laugh.”

I told him the book has interviews with Seinfeld, Billy Crystal, Ray Romano, Colin Quinn, Lisa Lampanelli, Gilbert Gottfried, Chris Rock, Judah Friedlander, and about 50 more big stars that started  at The Comic Strip, several of whom talk about Larry!

And I told him the story that Comic Strip owner Richie Tienken always told me about Larry.  There were times in Larry’s early career when if he wasn’t happy on stage, either with his set or the audience, he’d throw the mic on the floor and storm off in the middle of his set.

Richie said that mics were expensive, so one night they played a trick on Larry, and glued the mic into the stand, and when he went to throw it he couldn’t get it out!  Larry smiled and said it was a good story, but he didn’t remember it.  Richie Tienken re-confirmed it for me when i got back to New York.

As I was about to leave, I thought of shaking his hand, but I had a feeling he wasn’t into shaking hands in general and to tell you the truth neither am I.  I actually wear a little bottle of Purell hanging from my belt at all times.   So I said to him, ” You don’t shake hands do you?  And he said, ” I prefer not to!”, at which point I pointed to my Purell and we had a good laugh.

I really wanted to ask for a photo but that’s where I drew the line.   Things were going so well I didn’t want to take the chance of him saying “No.”

However we did exchange contact info and I already sent him a copy of my book with a note that got delivered just yesterday, the date of  which will vary depending on when you read this Blog post! (LOL)