Nat Geo Gets Into Comedy With Duck Quacks Don’t Echo

They always say that everyone wants to be in comedy, and now I’m sure it’s true.  Even Nat Geo is getting into the mix.  I attended a taping the other night in the AMV/Unitel studios on West 53rd Street in Manhattan, where Wendy Williams does her show, to see “Duck Quacks Don’t Echo” with three of my comedy friends starring in the show, Tom Papa, Michael Ian Black and Seth Herzog.

I had just seen Tom kill it at The Village Underground, a beautiful venue recently taken over by Noam Dworman of The Comedy Cellar.   Noam is very proud of the space as he should be.  He put in great lighting and sound, and every show I’ve seen there so far has been super! 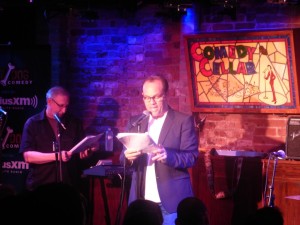 Tom Papa on stage at Noam Dworman’s The Village Underground, now part of The Comedy Cellar

Last week Paul Provenza came in to do his new show Set List, and everyone is talking about Jim Norton’s performance, and how great he was doing it for the first time.

The reason it’s called Set List is because Paul gives each comic their “set list” when they hit the stage, and not a moment before.  They have no idea what it’s going to be, and it’s not topics like “Internet Dating” it’s more like “Anorexic Dog”, or “Penguin Sex Therapist” which one comic actually got stuck with, when I saw the show in Montreal this past summer at Just for Laughs.

So I ran into Tom Papa at The Underground, and he invited me to see his new show and two days later, before I even got a chance to make arrangements with him to attend I got an invite.

Duck Quacks Don’t Echo is a comedy/science show where each of the three stars gets to present weird, unusual and incredible facts. In addition to telling us the fact, they will each participate in an on-the-spot experiment proving each fact. It kind of reminded me of the stuff I used to do in science class to make the other students laugh when the instructor wasn’t looking.

On one occasion I mixed the wrong ingredients together and accidentally created poison gas, and they had to evacuate  not only my class, but the entire floor.

The fact that stuck with me was than you can’t hum while holding your nose.  It’s true.  We  tried humming Yankee Doodle, which was a very synchronicitous choice as I’ll explain in a moment, and then Tom instructed us to hold our collective noses and all the humming stopped.  Who know that humming comes through the nose?

Another thing they could not have known is that I’ve always been fascinated by humming and actually did my college thesis on Abe Bembelman, the man who invented humming, back in the day when Yankee Doodle was popular.  Before Bembelman people would hear a song they liked and have no way of recalling the tune.  Then Bembelman came along and changed the entire world.

Bembelman was actually English but moved to this country during Revolutionary times, and during the Revolutionary War he was responsible for teaching the English to hum when they went into battle.   Fortunately for us, the English hummed so loud that the American’s heard them coming, and that’s how we won the war, because basically you can’t sneak up on anyone while you’re humming!  As a result Abe Bembelman became an American national hero.  It’s in the history books!  Look it up!

So towards the end of “Duck Quacks Don’t Echo” the guys took a break for a costume change and I was wondering what was going on, until they came back in what turned out be motion detection outfits but what at first looked like a re-enactment of “Blue Man Group Attacked By Ping Pong Ball Gang.” 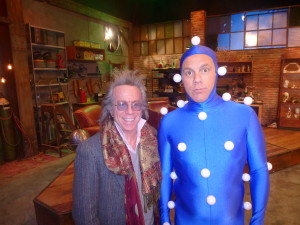 Tom Papa in his new look for the film ” Attack of the Ping Pong Ball Men!” 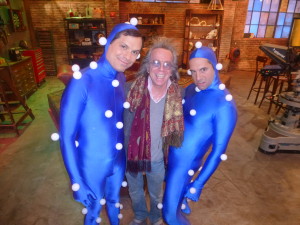 (L-R) Michael Ian Black, Jeffrey Gurian, and Seth Herzog in a very strange stance that goes perfectly with his outfit!

Seth Herzog is used to wearing costumes as he’s been known to do when doing his popular Wonder Woman routine, so he took to this quite naturally, as you can see in the photo.  Seth is the warm up comic for Jimmy Fallon and plays all the hot clubs in the city.

He also has his own show called “Sweet” every Tuesday night at The Slipper Room on Orchard Street, in NYC, where I hope to perform one day!  It’s one of the few stages I haven’t been on.

What made the evening even more special was getting to re-connect with two guys I hadn’t seen for a long time.  Michael Ian Black and Duck Quack’s producer Jim Biederman.

Michael and I have history.  Back around 1992 Michael and I and Ben Garant wrote the first ever interactive film for Sony called “I’m Your Man.”  It was shown in the Sony Theatre on 19th Street and Broadway and the audience got to change the outcome of certain scenes by pressing buttons from their seats.  From what I recall Sony spent about half a million bucks on outfitting the theatre with the buttons that attached to the arm rest of each seat. 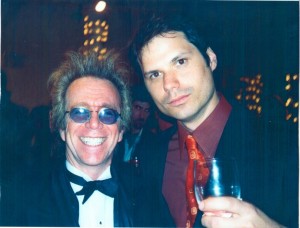 Michael Ian Black with Jeffrey Gurian at a Roast, possibly for The Naked Angels!

This was before Michael went on to co-create MTV’s The State and the sketch group Stella of which he was a founding member, along with Michael Showalter, and David Wain.  They performed together from 1997 through 2005.  The photo below was after one of the Stella’s performances at a place called Fez, which was their home base, and Ben Stiller and Janeane Garofalo both came by that night. 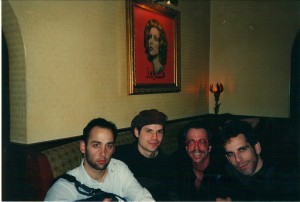 Duck Quacks producer Jim Biederman is the head of JimCo Productions and I hadn’t seen him in maybe 15-20 years.  Jim was at Lorne Michael’s company Broadway Video back in the day working with a guy named John Head, who as I recall was in charge of film acquisition, and I was making short, bizarre little films in those days.

I had been sent up to see Herb by another legend Jack Rollins, best known for managing Woody Allen and producing all of Woody’s movies, and in those days was also managing Robin Williams and Billy Crystal.   When I first met Herb he said he didn’t even have to look at my stuff because if Jack Rollins said I was funny, I was funny!

I was still a practicing Cosmetic Dentist in those days, which is why in the photo below Billy Crystal is pointing to his teeth.  Jack Rollins had wanted to do a sit-com based on a dentist in show biz and thought Billy would be great to play me! 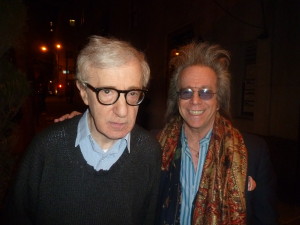 Jeffrey Gurian with Woody Allen who he had met many years earlier through his mentor Jack Rollins! 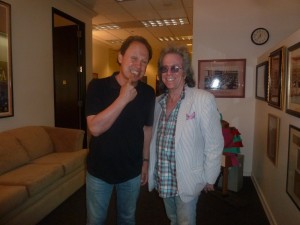 Jeffrey Gurian with Billy Crystal pointing to his teeth, referencing Jeffrey’s history as a dentist!

But Herb did look at my films and set me up with a meeting with Jim Biederman.   I was doing a comedy news broadcast at the time with stories like ” Several men were arrested for smearing creamcheese on the ankles of elderly women who wore their stockings rolled down like bagels”, and “The Masters of Disguise” which were two master criminals who disguised themselves as inanimate objects to commit their crimes.

It started with two men disguised as coats who robbed a hat store by coming in over the arms of two other men who claim they had no part in the crime.  I did an interview with one of the victims who gave his account of what happened, and said that one of the coats pulled a gun and said, ” Just act natural like we’re your coats and no one’ll get hurt!”   Police artists did a composite drawing of the perpetrators.  One man was described as  a tan trenchcoat, the other man was said to resemble an overcoat, possibly black, …  but could have been navy blue!

I had several crimes like that culminating in 250,000 men disguised as vests robbed a suit warehouse taking all 250,ooo suits and the police artists were going out on strike so as not to have to draw pictures of all 250,000 vests!   As I recall Jim set me up with a meeting with John Head who said ” I see no reason why you shouldn’t be doing films for SNL”, and the reason it didn’t happen is a story for another day.

Jim went on to produce  a ton of TV shows including “The Whitest Kids You Know” and the Onion News Network, and I went on to write a column for Weekly World News called “Gurian’s World of the Bizarre” which the guys from The Onion told me they were fans of.  So it all comes full circle!

And the wild stories I was writing also became part of a comedy news broadcast which I shot up at WPIX TV.  Check it out here:

It was great to see Jim again after all these years and I wish him luck with Duck Quacks!