Posted by Jeffrey Gurian on November 8, 2011

About ten days ago, the comedy world was shocked to hear that Patrice Oneal had suffered a major stroke. It’s still hard for me to wrap my mind around it. When you think of the proverbial gentle giant, you think of Patrice Oneal.

I know and have loved and respected Patrice for a long time, although expressing that sentiment might have made him uncomfortable! I was always drawn to him from the first time I met him. We had a little mutual admiration society going for us. I always felt good being around Patrice, and he always seemed to light up when he saw me! We were drawn to each other. Maybe it was the disparity in our physical beings. One of the first times I met him I suggested that we become roommates so we could share clothing! He thought that was funny! 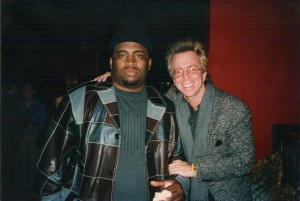 Jeffrey Gurian and Patrice Oneal on 11/10/01, almost ten years ago to the day!

When we were planning on doing a show together I suggested that he come out holding me in his arms like a baby!

We connected on many levels. Patrice is a thinker. He’s a comedy philosopher. Really smart dude. He has everything figured out to a “T”! ( Whatever that means! Why do they use the letter “T” as a symbol of perfection???) 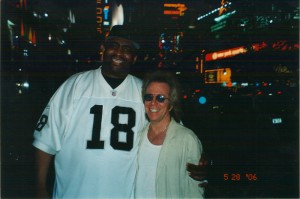 Jeffrey Gurian of Comedy Matters TV under the protective arm of Patrice Oneal! i still think we’d be great roommates!

We shared a deep and well thought out philosophy on women. He made fun of me being respectful to women, but at the same time gave me props for being genuine. Our approach to meeting women was world’s apart, … diametrically opposite, … but our end goal was the same. People might have mistaken him for a misogynist. I know him as a lover of women! He was just offended by their power, and how weak and dumb guys become around them!

When he asked me to be his co-host on The Black Phillip Show, (a radio show we did on Sirius), part of Opie and Anthony’s Saturday Night Virus, I was really honored. It was me, Patrice and Dante Nero, plus other guest comics. Patrice and I argued over our “meeting women philosophies”, with Dante often taking my side and explaining my thinking to Patrice and the audience. (LOL) What also swayed him to invite me to be part of his show was that he said I was the only white man he ever met who knew all the words to “Bitch Betta Have My Money”, an old-school hip-hop classic from AMG back in 1991! It happened to be his theme song!

Patrice talking about me is a big part of one of my demo reels!

I brought lots of fun girls on the show, after warning them of course about what they could expect from Patrice, who typically was very complimentary to them, but at the same time fascinated by what made them tick, and how they used their feminine beauty as a power! I was disappointed that we only got to do a few shows together before it ended. 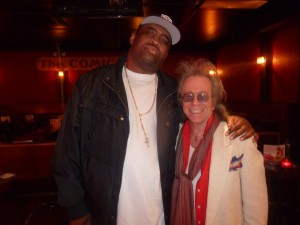 Jeffrey Gurian of Comedy Matters TV and Patrice Oneal after judging The Lottery Show at The Comic Strip on 9/27/11!

I saw him kill on the Charlie Sheen Roast recently, and then saw him in person a few weeks ago when he was a guest judge on The Lottery Show at The Comic Strip, along with Robert Kelly and Paul Mecurio. Some fun video of that is below. 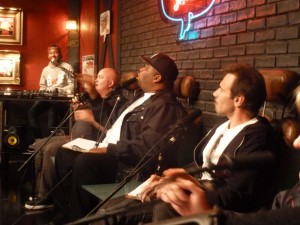 Comedy manager/producer Wayne Rada is also a long time friend and colleague of Patrice and when I saw him last night at the Andy Kaufman Awards at Gotham Comedy Club, which he was producing, he told me that Patrice’s comic friend Harris Stanton, told him that Patrice is in a hospital in New Jersey, breathing on his own, but on a feeding tube. At this point he’s only capable of blinking his eyes.

I’m a very big believer in the power of prayer, so hopefully everyone who reads this post will say a prayer for Patrice, and put that Healing energy out to the Universe, and help him to recover as quickly as possible.

Please respect his family’s privacy at this time. An email has been set up for fans to send him well wishes and his family will make sure he gets them. You can write to LoveForPatrice@gmail.com.