I hadn’t seen Robin Williams in so many years. We met back in the days when Columbus Cafe was a popular hangout. I was reminiscing recently with Danny Aiello about that place and he told me a story of a night when Robert DeNiro, Al Pacino, Bruce Willis, Sly Stallone, Mike Tyson and more were all there together!

It was that kind of place, and Robin used to come by as well! 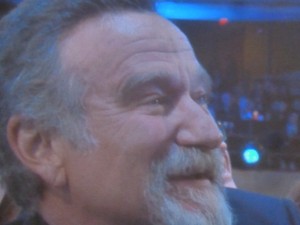 But I first met Robin the same way I met Billy Crystal, through Jack Rollins, the legendary manager who managed Billy, Robin, and Woody Allen in those days! We met up in Jack’s office cause Jack thought I was funny and wanted to help me.

Years later I wrote a joke that Robin used at the Friars Roast of Richard Pryor. The joke was “The first time I met Richard Pryor was in the steam room of The Friars Club, and he was standing naked in front of Kareem Abdul Jabbar, and I thought he was Jabbar’s c**k! ( Huge laugh!)

“And then he said “Hello” to me and I thought to myself, I always knew Black guys had huge schlongs, but I never knew they could speak!” And the HUGE laugh got even HUGER!(If there even is such a word!)

At the Comedy Awards, Robin was given the Stand-Up Icon Award by comedian/actor Patton Oswalt, who called Robin an “explosion” and “a machine-gun”, which are both appropriate descriptions of Robin’s delivery.

He hits the stage like an explosion, and shoots lines out like a machine gun. I’ve seen some early rare footage of him at The Comic Strip from back in the late 70’s and early 80’s and he was the same back then!

Here’s the clip of him receiving the award and him saying he’s ” one of the luckiest f**ks in the business!”