I happen to know the Sklar brothers for a long time. Still can’t tell them apart. I interviewed them in Montreal this past summer at the Just for Laughs Festival, for Comedy Matters TV and embarrassed myself on camera by getting their names wrong, or at least that’s what they told me. 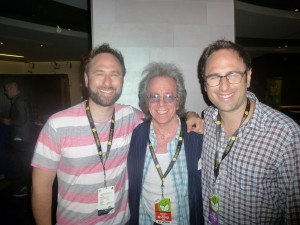 (L-R) Randy Sklar. Jeffrey Gurian of Comedy Matters TV, and Jason Sklar (correct me if I’m wrong! LOL) at the Just for Laughs Festival in Montreal!

But anyway, they have a hot podcast called “Sklarbro Country” which I hope some day to be on, and I was really happy to open the Sunday paper and find the ad they’re doing for Time Warner Business Cable! Maybe they can find out why I always lose my internet connection??? Huh guys??? Hook me up! 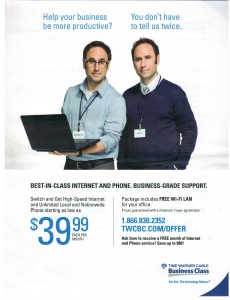 Jason and Randy Sklar in their national Time Warner Cable ad! Good for them!