Stan and Ollie Is Truly Amazing – A “Must See” Film

Growing up very middle class in The Bronx I was lucky that my Dad had such a good sense of humor and would take me to see comedy films starting when I was very, very young.  I remember us sitting in the theater laughing together like it was yesterday.  Laurel and Hardy were my favorites.  I think because in some ways Oliver Hardy reminded me of my Dad. He was a big guy, certainly not as heavy as Oliver Hardy though in his mind I think he was, but he was one of those really nice guys and people often took advantage of his kindness. Just like Oliver Hardy!

I’ve been in the comedy world for decades now but comedy has changed drastically since the days of Laurel and Hardy, and Abbott and Costello, and The Marx Brothers.  However John C. Reilly and Steve Coogan did a wonderful thing.  They brought Laurel and Hardy back to life in their wonderful film “Stan and Ollie” which I was privileged to see at the 92nd Street Y the other night, and I’m so glad I went.

First I was wondering how they’d pull off the look because John C. Reilly, as talented as he is looks nothing like Oliver Hardy, but in some of the scenes you’d swear it was him, right down to the double chin.  The prosthetic people on this film deserve an award for doing magic.  Both John and Steve looked so much like the real guys it was uncanny. And with the way they had down the mannerisms, the walk, the accents, and facial expressions you’d think it was the real Laurel and Hardy.

I can’t even begin to imagine the time it must take to get all of those factors down. The pronunciation of the words was perfect.  And when Steve as Stan scratches his head like Stan Laurel did it was exactly like Stan did it.  The only thing he didn’t do was Stan Laurel’s cry.  When he used to cry in his films it was sad and hilarious both at the same time.  His facial expressions are what made him such a lovable character, and Steve Coogan nailed it. They both did.

Unfortunately for the world Laurel and Hardy left us quite a while ago, Ollie in 1957 at only 65 years old, and Stan in 1965 at 75 years old.  After Oliver passed Stan never performed again, but still wrote material that the two of them could have done on stage. They were brought together on the Hal Roach studio lot and the comedy world was never the same.

After the screening which was very funny and also very moving John and Steve came out on the stage to be interviewed. During the film John and Steve perfectly re-created the “Way Out West” dance from the movie of the same name that came out in 1937.  And I dare you to watch that dance without laughing hysterically.

Joining them onstage was the director Jon S. Baird and the evening was narrated by Annette Insdorf one of the best moderators I’ve seen at 92Y events.  She’s a Columbia Univ. film professor and was so knowledgable about the film and film in general and had such interesting insights that her questions kept the energy high and kept things moving along at a nice pace.  I often tell the people at 92Y that they should choose comedy people to moderate the event because they’re used to improvising all the time, but Annette was wonderful 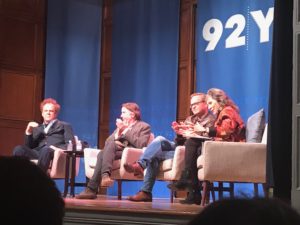 I wish I had had the opportunity to tell John and Steve in person how much I liked it and to thank them sincerely as part of the comedy world for doing more than justice to the memory of these two talented men, but hopefully they’ll read this or their PR person will show it to them. The sad thing is that comedy like Laurel and Hardy no longer exists on the planet.  If two guys tried to do that today I don’t think they’d even get a meeting, no less representation.  There are no more duos in comedy. Unless you count Nick Kroll and John Mulaney and they both work individually too.  Laurel and Hardy were a team and that’s all they did.

Their kind of humor may not be considered “hip” for the 21st century, but you should have heard the laughs from the people in the audience at the 92Y!  It was genuine, and truly AMAZING!!!