The Story Pirates is a story in itself. Founded in 2003 by talented, caring people like Kristen Schaal and Lee Overtree, and about 7 others who went to school together at Northwestern University in Illinois, it is a writing initiative for elementary school children to encourage their creativity and get them to write. From what Kristen told me it exists in different states under different names.

What they do is they take children’s stories and get well known actors to act them out within the framework of a musical-sketch-comedy show. But they stage them in such a wonderful way with great music, furry monsters, Viking costumes, flying cats, and sacks of treasure that they create an unforgettable experience for kids and adults alike. 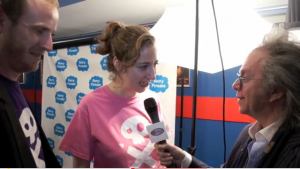 Jeffrey Gurian interviewing Kristen Schaal and Lee Overtree on the red carpet of the Story Pirates event with Jon Stewart!

Just between you and I, I was totally prepared to be bored when I attended, thanks to an invite from my friend, performance artist Kiki Valentine who was also involved in the presentation, and who is friends with Lee Overtree, the artistic director of S.P., but instead I was captivated and totally entertained by the ideas, the huge puppets, and the fun of it all. 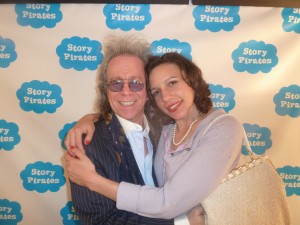 Jeffrey Gurian and the talented and beautiful Kiki Valentine at Story Pirates at Symphony Space!

So Tracey and Jon Stewart co-chaired the event at The Symphony Space on Broadway and 95th Street, and were joined by Lou Reed of Velvet Underground fame, The Daily Show’s John Oliver, comic/actor Kristen Schaal, comic/actor and friend Mike Birbiglia, currently starring in off-Broadway’s “My Girlfriend’s Boyfriend”, Ana Gasteyer from SNL and Wicked, and Josh Gad, one of the stars of the Tony-nominated Broadway show, “The Book of Mormon” along with the troop of Story Pirates and they all took part in acting out these children’s stories. 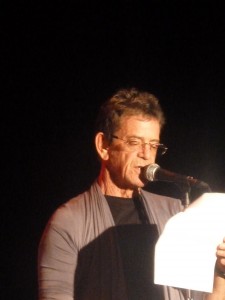 Lou Reed on stage reading a piece that a child wrote! 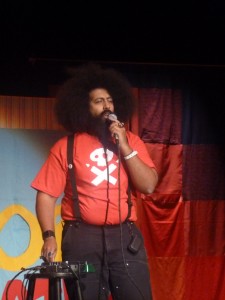 The inimitable Reggie Watts, performing one of his unique pieces, based on a child's idea, onstage at Story Pirates! 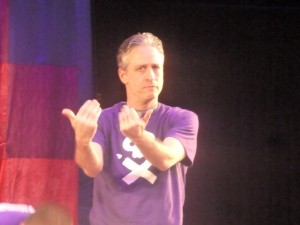 Jon Stewart on stage acting out a story for the Story Pirates! 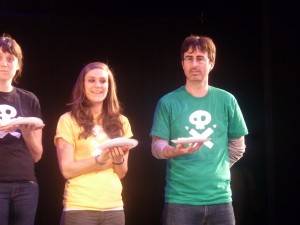 John Oliver getting ready to throw a pie into the face of one of the Story Pirates troop! 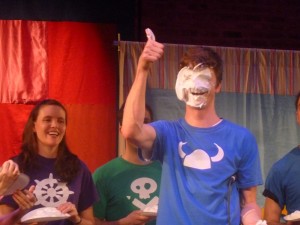 You can see the red carpet video below, in which I kiddingly tell Jon Stewart that the reason they call it “Story Pirates” is because they steal ideas from little kids, and then I suggest that they should do that on The Daily Show! Check it out!