Ed Helms presented the award for Best Late Night Comedy Show after telling people he drank a whole bottle of Tequila, mixed it with four tabs of acid, and just killed Robin Williams backstage with a sword because he thought he was a dragon. 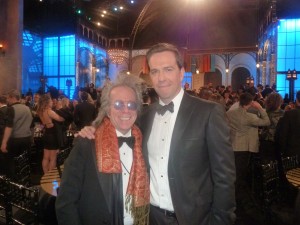 Jeffrey Gurian of Comedy Matters TV with Ed Helms at The Comedy Awards 2012!

The nominees were The Colbert Report, The Daily Show with Jon Stewart, Late Night With Jimmy Fallon, Late Show With David Letterman, and Real Time With Bill Maher.

When The Daily Show was announced as the winner, the whole crew hit the stage and Jon decided to let the correspondents speak. It was Samantha Bee, Jason Jones, John Oliver, and then Jon took the mic back! It didn’t turn out the way he expected! See what happened right here!