My superstar P.R. team Goldman/McCormick has been working overtime and as a result, last night at 11 P.M., I got a call from Mark Amazon on 700 WLW News Talk Radio, known as “The Big One”, out of Cincinatti, Ohio for my take on the Gilbert Gottfried/AFLAC scenario. 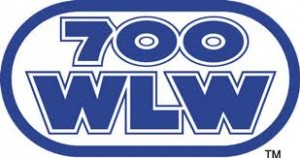 Having known Gilbert for more than 25 years, I told them that I felt it was a mistake in judgment that Gilbert regretted, not only because he lost his position as the voice of AFLAC, but because he never intended to hurt anyone’s feelings.  He had already posted apologies on his own Twitter page.

With AFLAC having such a huge percentage of it’s business in Japan, I guess it couldn’t afford the potential losses from people who were insulted by Gilbert’s Tweets, and made the choice to let him go.  The only other way would have been for them to stick up for him, against an entire ravaged country, and that would be a very unlikely scenario for anyone to expect.

Gilbert was just being Gilbert, as he’s always been.  That’s what he does.  He goes where no one else dares.  Comedians often try to do that.  I have several thoughts on that matter. 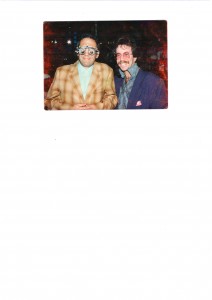 Gilbert and Jeffrey back in 1992, when Gilbert starred in a short film Jeffrey wrote called “Seeing is Believing”, where Gilbert wears glasses like microscopes, and tries to get X-ray vision to see through women’s clothing. Also featuring Camille Donatacci Grammer, Kelsey Grammer’s recent ex, playing a very sexy nurse. Check it out at http://www.jeffreygurian.com

Comics spend every day looking for what’s funny about things that most people don’t see as funny.  Not cause they want to, cause they HAVE to.  They have no choice.  It’s how comics think.  It’s in their blood.  It’s a drug, and they’re addicted.

Some comics work clean, some work filthy.  Some comics say the most outrageous things, but they say them within the confines of a club, not in a forum to the world.  I think that’s what makes the difference here.

Sick, cruel humor has always been around.  Some people love it.  I happen not to, but that’s coming from someone who wrote nasty jokes for Friars Roasts for many years.  BUT, … I ALWAYS asked the person being Roasted if there was anything that was off-limits to him, so that I wouldn’t write anything particularly hurtful. That’s just me.

Maybe human beings have a naturally cruel side?  Just go to any schoolyard, or high school to see what I mean.  Probably all you have to do is think back to your own high school days.  Not a very comfortable time right?  Bullying isn’t something new.  Kids make fun of other kids if they don’t think you fit the mold.  And how many people actually did in those days.

I always say, ” If high school was the best time of your life you should probably kill yourself!” (LOL) For many people it was the worse time in their lives.

And very often those very same kids who didn’t fit in in high school went on to become comedians!  They used humor to help them fit in.  So many comics are socially awkward, and lacking in social graces. They only have personalities on stage.  It’s an amazing thing!  Offstage they can be quiet and shy.

In any case, Mark Amazon and the other radio hosts I spoke with didn’t seem to be coming down too harshly on Gilbert.  They all seemed to understand that Gilbert was being Gilbert.  It’s unfortunate that it had to happen at all, meaning the devastation that hit Japan in the first place, and the Tweeting that followed it. 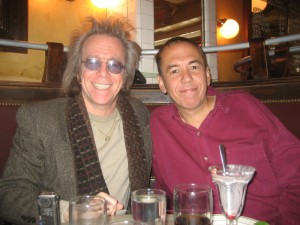 Jeffrey Gurian and Gilbert Gottrried lunching at Pastis during Gilbert's interview for the book on the 35 year history of the legendary comedy club The Comic Strip, the club that launched the careers of Jerry Seinfeld, Eddie Murphy, Chris Rock, Larry Miller, George Wallace, Paul Reiser, Ray Romano and so many more. Jeffrey is writing the book with owner/founder of The Strip, Richie Tienken.

Ryan McCormick and Mark Goldman have a P.R. company aptly named Goldman/McCormick, which should really be named Goldman/McCormick’s Super-Incredible Fantastical Magical P.R. Company, but they couldn’t get all that on the business cards.  Every so often they do an event at their offices on West 38th Street, ( 34 W. 38th, 5th Floor).

Tonight they did an event centered around a client’s book called Joe Dimaggio- The Long Vigil, but I wouldn’t care if they were doing an event around a coloring book! I know if it’s a Goldman/McCormick event I have to show up because it will always be a fun, spectacular event packed with interesting people. And tonight was no exception.

I ran into Bob Bowdon, an on-air reporter for The Onion News Network, which runs on the IFC Channel, Friday nights at 10 P.M. I had last seen Bob down at Soho House a few weeks back when he debuted the trailer for his hit documentary film “The Cartel”, which is about corruption in public education. 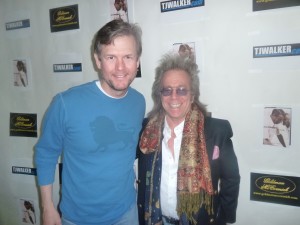 Anyone who knows me knows I love comedy news and always have. There’s something about news, and the cadence of news, and probably the absurdity of most news that lends itself to comedy, which is why SNL has been doing a News Update since the Civil War. I had the honor of writing for the legendary Weekly World News, where I had my own column called “Gurian’s World of the Bizarre” where I got to write stories like “Rare Virus Sweeps Japan, Victims Too Weak To Bow”, and ” Man Impaled On Spike Still Shows Up For Work On Time.”

The Onion guys actually told me they were fans of Weekly World News. Unfortunately it’s no longer in existence, but fortunately for me, … I am. Bob told me that virtually all of the Onion on-air newscasters were once serious newspeople doing real news on TV.  Bob humself was a reporter on Bloomberg TV doing boring business news until 2006, when his agent submitted him for the Onion gig.

Bob used to do his Bloomberg gig from the Nasdaq Market site on 43rd Street and Broadway, which is now the site for the new late night TV show “All Night With Joey Reynolds” on NBC New York Nonstop. When I walked into the party the first thing Bob said to me was, ” you’re not gonna believe this, but I saw you the other night on Joey Reynolds’ new TV show.”  Turns out he’s doing the show next week.  it’s a great show on M-F, from midnight to 2 A.M., channel 161 on Time Warner in Manhattan, but seen on all cable providers.

I’ll do more on Joey Reynolds in a another posting!  Stay tuned!