Heather Height: "Comedian Who Matters" At The Comic Strip

Comedy Matters held it’s periodic contest for “The Comedian Who Matters”, where up and coming comics win a shot at performing at the legendary comedy club The Comic Strip, the club that launched the careers of legends like Jerry Seinfeld, Ray Romano, Paul Reiser, Eddie Murphy, and Chris Rock to name just a very few. 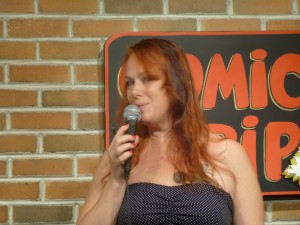 Heather Height, winner of the “Comedian Who Matters” contest on stage at the legendary comedy club The Comic Strip!

Comics from all over submitted entries to the contest and we chose 6 finalists. Heather Height was the final winner, and got to perform on the late show I host at The Strip on Sunday and Monday nights.

Heather hosts an open mic at Cha-Cha’s restaurant on Mulberry Street in Little Italy every Wednesday evening with two shows, one at 8 and the other at 10:30. I’ve been there and they’re great! Cha Cha is also a well known actor, and has been in many movies and TV shows.

Heather had this to say about her Comic Strip experience: “I really want to thank the staff and Sunday night manager of The Comic Strip Jenn. Every time I’ve been there they have always been awesome, and last night was no exception. Unfortunately after my second drink, I didn’t recognize Jenn when I was leaving the club, and I asked her if she was a comic, being starved for the company of another female comedian. She just laughed and reintroduced herself. It was embarrassing, but funny, and pretty typical of how I bumble through my interactions with other humans. (but I’m gonna blame alcohol anyway, HAHA!)

Check out more about Heather Height at http://www.heatherheight.com