Young Talent At The Comic Strip

The Comic Strip is legendary for the people that came out of that club, like Jerry Seinfeld, Chris Rock, Ray Romano, and Eddie Murphy just to name a few. But the nice thing about The Strip is that it also develops young talent who are going to be the stars of tomorrow.

Two that come to mind right away are Pete Davidson who’s only 18 and Jordan Rock who just hit the magic age of 21! 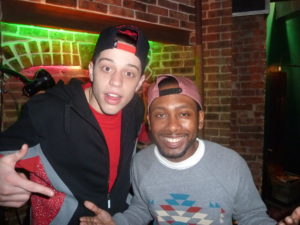 Pete is being mentored by Nick Cannon, who’s really taken him under his wing, which is such an incredible thing for a young performer, and Pete deserves it. He lost his Dad in 9/11, and turned his life to comedy. I’m sure his Dad is watching over him, cause he’s doing very well!

He has funny energy, meaning that when he hits the stage you WANT to laugh. He dresses kind of “gangsta” for a White kid, but he explains it by saying that all of his friends are Black. I get it! He’s authentic!

Pete was all excited ’cause he just got back from doing five shows in Miami with Nick, and Kase Glenn at The Miami Improv, while staying at The Mayfair Hotel. Pete opened the show. It was the first time that Pete had to fly to a gig and he told me a very funny story.

The day he was to leave, he had a 10 A.M. flight but didn’t wake up until 9. He threw his stuff together and tried to call a cab but they told him it would be an hour. He got the valet guy to drive him for double the regular price, and offered him an extra $20. if he could make it in ten minutes.

Meanwhile his Mom was calling and yelling at him for being late. He got to the airport at 9:40, ran to check in and found himself on a long line. Just as he was resigned to missing his flight, the Black security guard recognized him, and yelled out, “Hey, you’re that dude from the show!”

Pete said,”I guess he had attended one night, and fortunately I did well!” The guard let him right through and referred to him as “The White Hope!” The other passengers were already aboard, and Pete ran on as they were about to lock the doors. He said he made it by one minute!

I had that happen to me once after having been snowed in the first year of the Aspen Comedy Festival. I had been stuck there for five days, when they gave me less than 30 minutes to catch a plane. I was literally running down the runway with my bags to catch the plane, and everyone stared, and glared at me as I straggled on board loaded down with stuff, and then first had to try and get it in the overhead bins, while everyone waited and rolled their eyes. Very uncomfortable to say the least!

Jordan Rock works The Strip as conscientiously as both of his brothers did, Chris and Tony, and it shows in the quality of his work. Nothing replaces stage time in perfecting your performance. He also hosts the latenight shows on Wed, and Thursdays, and I host them on Sundays and Mondays.

I predict that you’ll be seeing lots of these guys in the future. I wish I had started that young, but if you get famous in your 20’s you gotta be funny for 60 maybe 70 years! That’s a long time. I only wanted to have to be famous for maybe 20, … 25 years tops! Needless to say, I’m still waiting! (LOL)