Anthony Anderson and Royale Watkins should be very proud. For the last four years, at the beautiful Gotham Comedy Club on West 23rd Street in NYC, on the third Sunday of every month, they have been putting on their Mixtape Comedy Show which is a very cool mix of Comedy and Hip-Hop, my two favorite things. 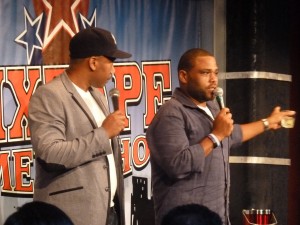 Anthony Anderson and Royale Watkins holding it down onstage at a previous Mixtape Comedy Show at Gotham Comedy Club!

To be able to sustain a show for fours years especially in New York City, where there is so much to choose from, is a major accomplishment. They never tell you who is appearing until you get there, but it’s always great talent. Two other people who should be very proud are Byron Ward and Kristen J. Eddy who produce the show.

Anthony flies in from LA whenever he can, and adds a little extra “Anthony Anderson flava” to the show. For the fourth anniversary “Bow-Legged Lou” from Full Force opened the show and introduced Royale Watkins to the stage. Royale warmed up the crowd as he usually does, and talked about being one of 14 kids in his family. Finally one day he had to take his mother aside and tell her, “You know, there ain’t much more room around here for any other people!”

Then he brought Nick Griffin to the stage. 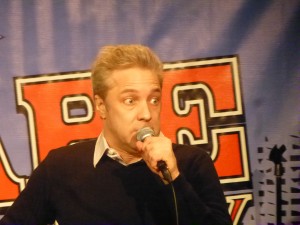 Nick has a very interesting, low-key delivery and I notice things like that, because among other things, I also consider myself a student of comedy! He’s so relaxed it almost seems like he doesn’t care, which is part of the art.

Nick explains that guys want abs so that when we go to have sex and take off our shirts, the girl takes one look and we go, ” You made the right choice honey!”

He said he was married three years and got divorced. They were supposed to be together till one of them died. Nick says he never even had a fever!

In talking about how perfect Brad Pitt is he wondered, “What did he do, pull a thorn out of G-d’s paw?” What does he have left to pray for? Like Brad Pitt starts to pray and thinks about it for a minute and then goes, ” “Ohhh, no, forget it, I’m good!”

Wil Sylvince is always a crowd pleaser! His imitation of his Haitian father’s accent always brings down the house, and his father would complain if Wil got bad grades in English and demand to know why. Wil would say, “Well maybe the English I have at home is not the English I have at school” and use the example of his Dad questioning him about someone stealing the doors from their home, “Who took de door from de door?” 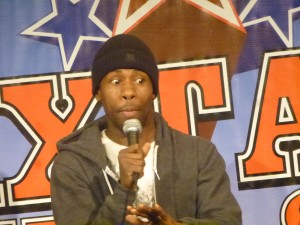 Wil Sylvince killing it as he always does at Mixtape Comedy!

Wil also said his rent was “$850. a month with utensils!” That’s hysterical!

One surprise guest was Sherri Shepherd from The View. I’ve been running into Sherri a lot recently and she’s always very funny. She’s newly married and was afraid to use her reading glasses in front of her husband because she didn’t want him to think she can’t see. 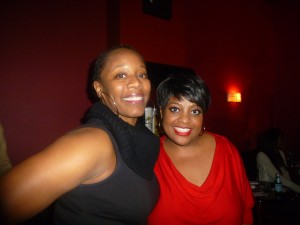 They did a fantasy thing where they checked into a hotel and made believe they didn’t know each other. Sherri acted like a hooker and her husband cheated on her with HER!

People in the hotel recognized her and said, ” Aren’t you Sherri Shepherd, and she said ” No, I’m Star Jones!” 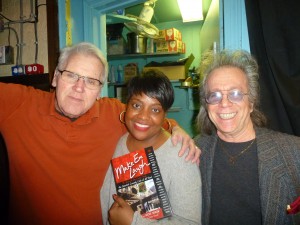 The big surprise of the evening was when Chris Rock stopped by to do a set. That was really amazing. What a gift to have Chris come by and do a guest spot on your show.

Chris talked about so many things. For instance he said the new Freedom Tower should be called “The Never Going In There Tower”, cause I ain’t never going in there! I don’t care if Tyra Banks is in there naked with a plate of ribs. I ain’t goin’ in there!

Then he talked about the TV commercials on MLK weekend using slogans like, “These Toyotas are so low priced they’re practically “free at last”, … free at last!”

He said the first Black diver went underwater to escape racism, and went on to talk about how the first Black person to do anything never has any fun. Like the first Black gymnast, Gabby Douglas, when she became a star old Black ladies were crying, “Remember when we couldn’t flip?” That visual alone was hysterical! 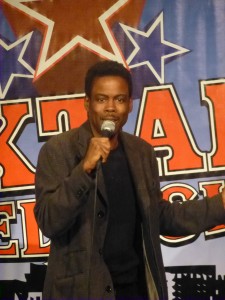 Chris Rock onstage at Gotham for the 4th anniversary of the Mixtape Comedy Show!

And then Chris told the story of how he was at the White House and found himself alone talking to Michelle Obama, and something about it just felt wrong. He was like, “I shouldn’t be talking to Michelle Obama with nobody else around! She’s really the First Lady of The United States and I’m talking to her like she was one of the Atlanta Housewives! Suddenly she faked like she saw Oprah and took off, and he told her not to worry it was “Aiight!”

Then he felt he had to look for someone of his level of intelligence so he scouted out Charles Barkley and Jay-Z. And in talking about Stevie Wonder’s performance he said it was so good, he put some extra “blind” into that shit! Only Chris Rock could say that and make it so funny!

Chris wrote a hysterically funny introduction to my new book “Make ‘Em Laugh”, about the 35 year history of The Comic Strip, the club where he was discovered by Eddie Murphy back in 1986. It was great to see him again as always!

What a super show! Can’t wait for next month! 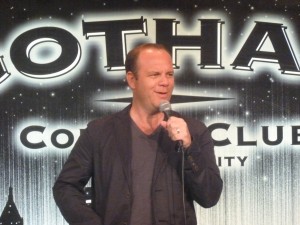 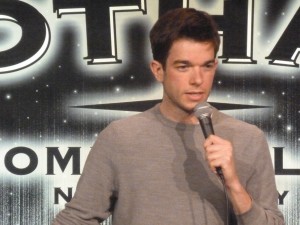 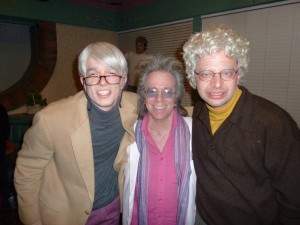 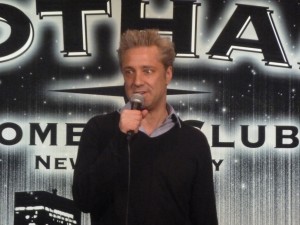 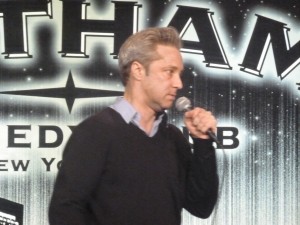 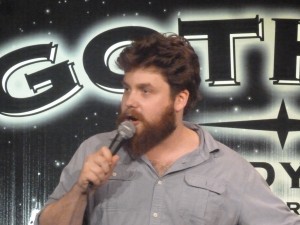