The Comedy Cellar’s Live From The Table

I had a really great experience as a guest on the Comedy Cellar podcast called “Live From The Table.” Noam Dworman the owner of The Cellar is such a kind and hospitable guy, and I’ll tell you why I say so!

The inviting look of the outside of The Comedy Cellar! Makes you wanna go in and have some laughs!

First let me tell you about The Cellar. It’s a magical place where every single big star likes to hang out and perform. On any given night you’ll see Louis CK, Chris Rock, Jerry Seinfeld, Dave Attell, Jim Gaffigan, Ray Romano, Colin Quinn, and anyone who happens to be in town from LA hanging out there or getting up to do a set. It’s not that the 150 seat room is so overpoweringly beautiful, because it literally is in a cellar, but I think it’s kind of an energy thing.

Rooms take on the energy of the people who own them and hang out in them, and I think it’s the positive energy that pervades the place that draws the big names. That and the Olive Tree Cafe that’s part of it with the VIP table in the back! 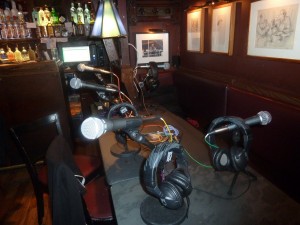 The VIP table in the back of the Olive Tree Cafe where all the stars hang out while waiting to go on! Here it’s set up for the weekly podcast on Tuesday nights!

The club at 117 MacDougal Street, was originally owned by Noam’s Dad, the beloved Manny Dworman, who opened it in 1980 as Cafe Feenjon, a coffeehouse that was a serious hang for musicians. I remember seeing that name as a kid hanging out in The Village. It always stood out to me because “Feenjon” was such an unusual name.

Manny was not only a nightclub owner, but also a talented musician who appeared as himself in the Seinfeld documentary film “Comedian” in 2002. The Cellar was renowned for its postperformance roundtable discussions with comedians in the audience about political issues, and it was these very exchanges that were the inspiration for ”Tough Crowd With Colin Quinn” on Comedy Central.

When Manny left us in 2004, Noam took over the helm of the club! And he hosts the Comedy Cellar podcast called “Live From The Table” which is done from the VIP table in the back of the club where the comics who are performing in that night’s show can be found along with the comics that just come to schmooze or hang out with their friends.

Noam had me on as a guest and made me comfortable right away. I got there early as I always do so I can just chill and be ready to go on the air. I had a bite to eat and even got to meet his beautiful little daughter Mila! 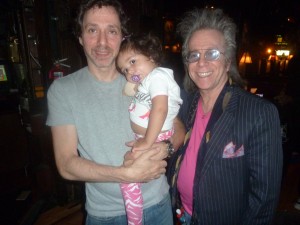 One of the things we were going to talk about was my book called “Make ‘Em Laugh” which is about the 35 year history of The Comic Strip, the comedy club on 81st and 2nd. Chris Rock wrote an amazing introduction to the book and I interviewed comics that started out there like Seinfeld, Chris, Larry Miller, George Wallace, Billy Crystal, and several that frequent The Cellar like Ray Romano, Jim Gaffigan, Jim Breuer, Judah Friedlander, and Colin Quinn who was a bartender at The Strip until he quit to start performing stand-up. 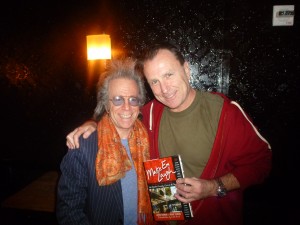 I was on the podcast with Jim Norton who I had just interviewed a few days before for my Comedy Matters TV channel, when he hosted the last show of the first season of AXS TV’s Gotham Comedy Live at the Gotham Comedy Club. 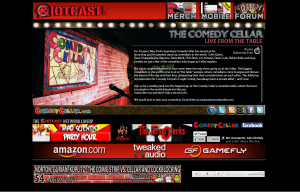 Promo for the Comedy Cellar podcast announcing Jeffrey Gurian as a guest, and coincidentally it’s #54 which is Jeffrey Gurian’s lucky number! He even lives on 54th Street and graduated #54 in his class!

This was Jim’s fun interview:

Then it was also Lynne Koplitz who I love, and she had also just been on that same show with Norton, and then it was Dan Naturman who I know for many years and have always enjoyed his comedy. 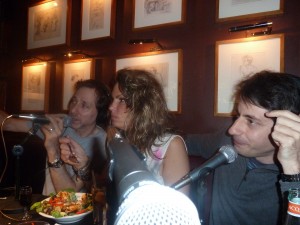 Noam Dworman, Lynne Koplitz, and Dan Naturman on “Live From The Table” at The Comedy Cellar!

Noam was such a gentleman to have me on to talk about another comedy club, but I liken that to a beautiful woman who’s secure enough in herself to acknowledge the beauty of another woman without feeling threatened. Noam has nothing to be threatened about. He is the owner of a truly legendary venue that the biggest stars in the business call “home” today.

Not only did he help promote my book but he himself was kind enough to buy a copy and said on the air that he really enjoyed it. That’s not a just a gentleman, it’s the definition of a “Mensch” a word you may not find in your dictionary, … unless your dictionary was printed in Tel Aviv! (LOL)

Noam began by trying to give me a compliment by telling people that they should read about me, because I had an interesting background and an interesting look, and that I looked like a star, but Dan Naturman couldn’t bear to let him finish. He couldn’t wait to interrupt with an attempt to sabotage the compliment by yelling out “No, he looks more like a 70’s style producer” or something to that effect, but I stopped him in mid sentence.

I said, ” Why do you say “No’? Why can’t you let Noam finish saying something nice about me? Why do you have to jump in and try and say something negative?” Noam immediately agreed and stated that Dan was known for being negative, and Dan backpedaled by saying that what he meant to say was that I looked like a successful producer or someone who worked behind the scenes.

That led us into a discussion of “cock-blocking”, which that was a form of, where people try and block someone else from succeeding in some way. For whatever reason they can’t bear for someone else to receive something good. It kind of became the theme of the show, as you’ll see on the promo!

Now Dan is always a nice, mild-mannered kind of guy, and I don’t even think he realized he was doing that. It’s probably just second nature for him as it is for many comics.

Guys grow up being used to cutting each other down. It’s not necessary. Every meeting doesn’t have to be a rite of passage. Guys can support each other. For a lot of comics every casual meeting turns into a Roast. It’s why a lot of guys are not comfortable hanging out with other guys. Patrice O’Neal was supposedly famous for putting other comics in their place, or making remarks about them, but he never did it to me. It’s basically high school behavior!

Patrice and I had a closer relationship, and we really “got” each other. I would go so far as to say we had mad respect for each other. 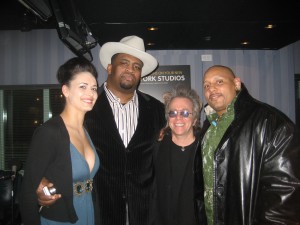 Many people still don’t know that I was his co-host on The Black Phillip Show on Sirius, along with his original co-host Dante Nero. And if he hadn’t left us when he did, so prematurely, we would have probably had our own show together. Listen to a phone call he left me one night after we did our first show together. It’s something I treasure: