I hadn’t seen D.L. Hughley since 2009 at a party at Comix which is no longer in existence. But I’ve always been a fan so when I heard he was going to be taping a special for Comedy Central at The Comic Strip I made sure to be there waiting backstage. 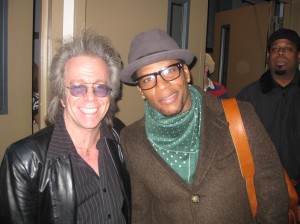 D.L. Hughley and Jeffrey Gurian of Comedy Matters TV at Comix back in 2009!

Dean Obeidallah was the MC and did a fantastic job of warming up the packed crowd. Every seat was filled, to the point where D.L.’s bodyguard had to stand. He would have needed two or three seats anyway, cause he was that big! (LOL) 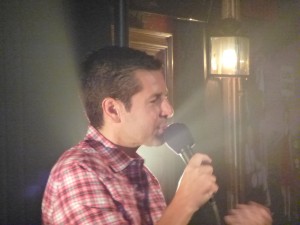 A kind of blurry Dean Obeidallah on stage warming up the audience for D.L. Hughley! ( Just to clarify, Dean’s not blurry, my photo is, cause the lighting was weird!)

Comedy Central execs like JoAnn Grigioni and Val Boreland were there, plus producer Lynne Appelle, joining owners Richie Tienken, Bob Wachs, and myself, and we all sat together in the balcony enjoying the show.

D.L. is always great and this night he did not disappoint! He was in rare form and the excited crowd showed him lots of love! After leaving the stage to thunderous applause, he gave the crowd an unexpected treat by returning to the stage a second time to do some material he felt like adding. Comedy Central still had their cameras set up so it didn’t present any problem. 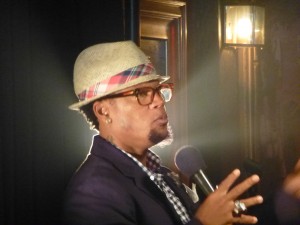 D.L. Hughley onstage at The Comic Strip killing it for his taping of a Comedy Central special called “D.L. Hughley’s Endangered Species!”

I caught up with him backstage afterwards and shot a really cool, fun, and funny video interview with him for Comedy Matters TV which I will be posting as soon as it’s edited.

His special will be a mockumentary called “D.L. Hughley’s Endangered Species”, which will air this October 27th, I believe he said, in which he suggests that “the Black man” as a race, be added to the endangered species list. It took him eight years to find a home for it, until Comedy Central stepped up to the plate.

I told him that’s the kind of project only a Black man could pitch. A White guy wouldn’t stand a chance! We had a good laugh about that, and about using token White guys to get certain things done. 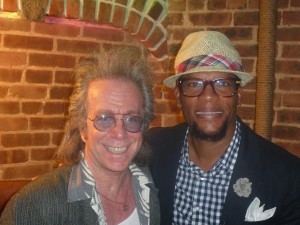 D.L. Hughley with a lighter skinned Black man, Jeffrey Gurian from Comedy Matters TV backstage at The Comic Strip! (Under certain lights a lot of people confuse me with Dave Chappelle!)

D.L. said when he has a White guy with him, he doesn’t even bother to carry a driver’s license. That’s how safe he feels having a White guy around! (LOL)

He’s also got a new book called, ” I Want You To Shut The F**k Up: How The Audacity of Dopes is Ruining America!” It’s available on Amazon.com as well as bookstores across the nation! You can check it out right here! and stay tuned for the video coming soon!